Flesh for Frankenstein (The Criterion Collection) 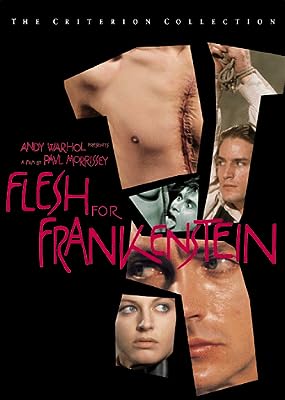 Price: $39.95
As of 2021-07-23 16:44:20 UTC (more info)
Product prices and availability are accurate as of 2021-07-23 16:44:20 UTC and are subject to change. Any price and availability information displayed on http://www.amazon.com/ at the time of purchase will apply to the purchase of this product.
Availability: Not Available - stock arriving soon
Buy Now from Amazon
Product Information (more info)
CERTAIN CONTENT THAT APPEARS ON THIS SITE COMES FROM AMAZON SERVICES LLC. THIS CONTENT IS PROVIDED 'AS IS' AND IS SUBJECT TO CHANGE OR REMOVAL AT ANY TIME.

If you're in the properly receptive mindset to appreciate the artistry of director Paul Morrissey's Flesh for Frankenstein, you may experience an unexpectedly delightful shift in attitude while watching the film. At first it appears that Morrissey is indulging in an exercise of pure camp (and it's true, he is), but then it hits you: underneath all the wretchedly awful dialogue and seemingly deliberate bad acting, it's clear that Morrissey and his cast are up to something wonderful. Not only is this a seductively beautiful film to watch--even the abundant bloodshed and gory scenes of dismemberment are esthetically striking--but it's been conceived with astute intelligence and a wealth of refined humor, while maintaining connections to the resonant themes of the Frankenstein story. In this case, Baron Frankenstein (marvelously overplayed by Udo Kier) is a rather twisted fellow, married to his sister (Monique van Vooren) and determined to create the perfect man and woman from the assembled remains of selected corpses. He's created a sexy female, but his male specimen's got the brain of a young man who aspired to be a monk, making sexual arousal a bit of a challenge! The dead man's friend (Morrissey discovery Joe Dallesandro) intervenes to disrupt the Baron's mad experiment, and it all leads up to a climactic laboratory scene of gruesome and tragic death, all worthy of Morrissey's splendid operatic staging.

Originally filmed in 3-D with outrageous scenes of in-your-face carnage, the film is enjoyable as camp horror, but it's equally entertaining as an exercise in pop-art symbolism and socio-political satire. This becomes even more evident from the wonderful audio commentary track featuring Morrissey, a very witty Udo Kier, and the stuffy but erudite critic Maurice Yacowar, whose insightful analyses make it clear that this is surely not a typical horror film. It's trashy but exquisite, and quite worthy of inclusion in the Criterion Collection. Once you've seen this, you simply must move on to its companion film, Blood for Dracula. --Jeff Shannon

Fiend Without a Face (The Criterion Coll...