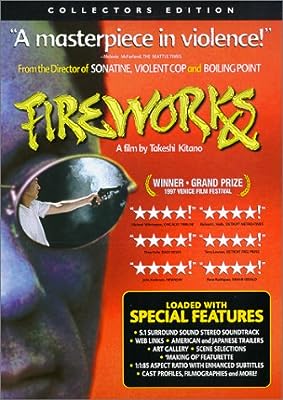 Price: $8.00
As of 2021-07-26 04:51:54 UTC (more info)
Product prices and availability are accurate as of 2021-07-26 04:51:54 UTC and are subject to change. Any price and availability information displayed on http://www.amazon.com/ at the time of purchase will apply to the purchase of this product.
Availability: Not Available - stock arriving soon
Buy Now from Amazon
Product Information (more info)
CERTAIN CONTENT THAT APPEARS ON THIS SITE COMES FROM AMAZON SERVICES LLC. THIS CONTENT IS PROVIDED 'AS IS' AND IS SUBJECT TO CHANGE OR REMOVAL AT ANY TIME.

A superstar and cultural icon in his native Japan, Takeshi "Beat" Kitano has conquered more than one medium, but he is best known in the West for his remarkable films. Among those, Fireworks is the clear favorite, a taut and enigmatic noir that fluctuates between perfect stillness and savage eruptions of violence.

Kitano plays a cop named Nishi, a determinedly impassive man whose face occasionally ripples with an involuntary tic, hinting at the explosive but contained forces within. Nishi's wife (Kayato Kishimoto) is dying of leukemia, a disease that already killed their child, and he cares for her with a shattering tenderness. While on a stakeout, Nishi takes a break to check in on her, and while he's gone his partner is crippled and another officer is killed. With death hovering at home and a score to settle outside, Kitano's hero sets off on an isolated course to seek justice.

Few filmmakers have understood as well as Kitano has here the irresistible draw of a thriller told with a moody calmness, with an eye toward graceful construction and rigorous composition. The careful, unhurried dispensing of story information also helps keep the focus on Nishi's warrior soul, on his mysterious capacity for the extremes of gentleness and brutality. The story here is the way one man can be the sum of such bold contradictions, and a great story it is. --Tom Keogh