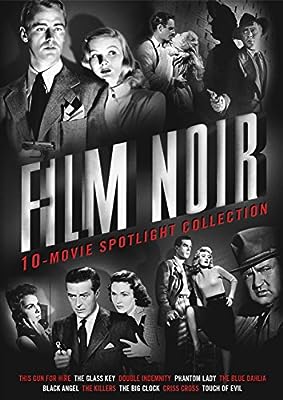 Price: $79.98
As of 2023-02-06 00:55:38 UTC (more info)
Product prices and availability are accurate as of 2023-02-06 00:55:38 UTC and are subject to change. Any price and availability information displayed on http://www.amazon.com/ at the time of purchase will apply to the purchase of this product.
Availability: Not Available - stock arriving soon
Buy Now from Amazon
Product Information (more info)
CERTAIN CONTENT THAT APPEARS ON THIS SITE COMES FROM AMAZON SERVICES LLC. THIS CONTENT IS PROVIDED 'AS IS' AND IS SUBJECT TO CHANGE OR REMOVAL AT ANY TIME.

Film Noir - the dark, suspenseful style of filmmaking from the 1940s and 1950s - has left an indelible imprint on the world of cinema as we know it. Whether it is the driven private eye, the flawed hero or the hapless schemer, these artistic films and unforgettable characters have come to define a genre laced with murder, jealousy, intrigue, corruption, forbidden romance and double-crosses. The Film Noir: 10-Movie Spotlight Collection showcases a selection of defining movies including Double Indemnity, Touch of Evil, This Gun for Hire, Criss Cross, The Killers and more. Starring Hollywood legends such as Fred MacMurray, Barbara Stanwyck, Charlton Heston, Janet Leigh, Orson Welles, Veronica Lake, Burt Lancaster and Ava Gardner, these classic films represent one of the most intriguing eras in cinema history.

Fires on the Plain - Criterion Collectio...