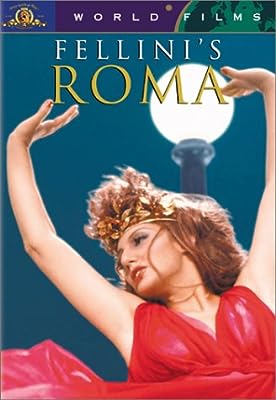 Price: $14.98
As of 2023-02-06 19:35:44 UTC (more info)
Product prices and availability are accurate as of 2023-02-06 19:35:44 UTC and are subject to change. Any price and availability information displayed on http://www.amazon.com/ at the time of purchase will apply to the purchase of this product.
Availability: Not Available - stock arriving soon
Buy Now from Amazon
Product Information (more info)
CERTAIN CONTENT THAT APPEARS ON THIS SITE COMES FROM AMAZON SERVICES LLC. THIS CONTENT IS PROVIDED 'AS IS' AND IS SUBJECT TO CHANGE OR REMOVAL AT ANY TIME.

Acclaimed director Federico Fellini (Fellini's Satyricon, La Dolce Vita, 8 1/2) brilliantly demonstrates why he is regarded as "the last of the great epic filmmakers," delivering "a thrilling personal memoir" (Newsweek) with this monumental and outlandish tribute to his beloved RomeThe Eternal City. This lavish autobiography, full of "lush fantasy sequences and monumental pageantry," (Los Angeles Times) begins with Fellini as a youngster living in the Italian countryside. In school he studies the eclectic but parochial history of ancient Rome and then is introduced as a young man to the real thingarriving in this strange new city on the outbreak of World War II. Here, through a series of "visually stunning" (Los Angeles Times) vignettes brimming with satire and spark, the filmmaker comes to grips with a "sprawling, boisterous, bursting-at-the-seams portrait of Rome" (Interview), reinterpreting with his inimitable style an Italian history full of "rich sensual imagery and extravagant perception" (Playboy).

Federico Fellini's 1972 ode to the city of Rome is far from a coherent narrative, but as a selection of images and sounds celebrating the famed Italian capital, it's dazzling and hugely enjoyable. Stylistically, it's a perfect bridge between the excesses of Satyricon and the nostalgia of Amarcord, and it showcases the true love that Fellini had for the Eternal City. Mixing autobiographical flashbacks with the travails of a present-day movie company making a film about the city (headed up by Fellini himself), Roma is an impressionistic tour de force, delivered via Fellini's unique cinematic vision. If you can't tolerate Fellini's larger-than-life approach, the sometimes-garish colors, or the circus atmosphere, you'll probably find Roma insufferable. But fans of Fellini will be in seventh heaven, especially during some of the wonderful set pieces--a music dance hall performance that's interrupted by bombing during World War II; a papal fashion show that's so surreal it must be seen to be believed; and a breathtaking sequence in which the film crew, tagging along with an archaeological dig, happens upon an ancient Roman catacomb and watches as the beautiful murals disintegrate before their eyes. Through it all, Fellini's passion for Rome (and moviemaking) shines through, especially in the film's climax, a dialogue-free sequence of motorcycles roaring through the city at night, a tour that ends at the magnificent Colosseum. At that marriage of past and present, Roma is about as perfect as cinema can get. --Mark Englehart

Nights of Cabiria (The Criterion Collect...