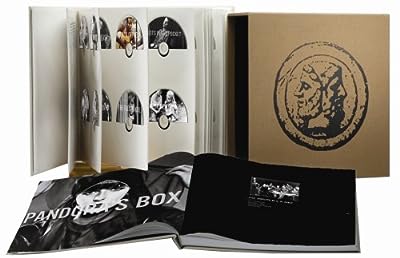 Price: $506.50
As of 2021-09-26 07:49:28 UTC (more info)
Product prices and availability are accurate as of 2021-09-26 07:49:28 UTC and are subject to change. Any price and availability information displayed on http://www.amazon.com/ at the time of purchase will apply to the purchase of this product.
Availability: Not Available - stock arriving soon
Buy Now from Amazon
Product Information (more info)
CERTAIN CONTENT THAT APPEARS ON THIS SITE COMES FROM AMAZON SERVICES LLC. THIS CONTENT IS PROVIDED 'AS IS' AND IS SUBJECT TO CHANGE OR REMOVAL AT ANY TIME.

One Spectacular DVD Box Set Janus Films opened American viewers’ eyes to the pleasures of Ingmar Bergman, Federico Fellini, and François Truffaut at the height of their artistic powers. Celebrate the fiftieth anniversary of this world-renowned distribution company with Essential Art House: 50 Years of Janus Films, an expansive collectors’ box set featuring fifty classic films on DVD and a lavishly illustrated hardcover book that tells the story of Janus Films through an essay by film historian Peter Cowie, a tribute from Martin Scorsese, and notes on each of the fifty films.

Essential Art House - 50 Years of Janus Films is a 50-disc celebration of international films collected under the auspices of the groundbreaking theatrical distributor. Packaged in a heavy slipcase set (remember, lift with your legs, not your back), one volume contains the DVDs in sturdy cardboard pages; the other volume is a hardback book with introductory essays and essays about each of the films. Janus Films is the precursor to the Criterion Collection, and this set is far and away the most beautiful art object the company has ever created. The substantial and subdued packaging is meant to stand the test of time, as are the films immortalized within. From The Seventh Seal to Jules and Jim to M and Pygmalion and The 39 Steps, this exquisite set is the art house DVD release of 2006, if not the decade.

The 200-page book provides context for the films and is worth reading in its own right. Martin Scorcese offers a brief and celebratory introduction, reminiscing about the thrill of seeing the antiquated Janus Films logo when attending a movie in one of New York City's art house theaters. Film historian Peter Cowie's essay about the history of art house cinema in America casts light on how films by directors like Akira Kurosawa and Ingmar Bergman first found American audiences. These days it's easy to take for granted our access to films from around the globe, but in the early 20th century it was only due to the efforts of a passionate few that these great films found theatrical life in the United States. Many of these films, particularly those from Europe, boasted more liberal attitudes about such things as sex and war, facing the threat of censorship and hostility from Hollywood-fed audiences who weren't accustomed to considering films as works of art. Janus Films evolved as a way to bridge these cultural gaps, introducing Americans to foreign sensibilities and big-screen stories that transcended language.

What DVDs Are Included?
The DVDs presented represent the cream of the crop of the Janus Films catalog, and the best of the Criterion Collection's bar-setting technical sophistication. Six of the films are being debuted on DVD on the occasion of the set's release, though they may be released separately later. These include Fires on the Plain, The Fallen Idol, Pandora's Box, Le Jour Se Leve, Miss Julie, and Three Documentaries by Saul J. Turell. Fans of copious extra features should take note--the discs contain only the films themselves. Those wishing to dig into the two bonus discs of material offered with Criterion's latest release of Seven Samurai, say, won't find that opportunity here. As for the selection of films, cinephiles may get into arguments about what's included and what's not, but any film school student would be far ahead of the game by devouring these fifty films. The treasures are listed below. --Ryan Boudinot