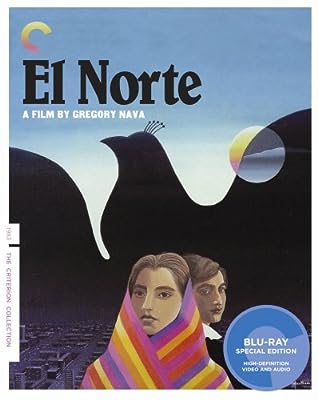 Price: $24.02
As of 2023-02-06 07:52:45 UTC (more info)
Product prices and availability are accurate as of 2023-02-06 07:52:45 UTC and are subject to change. Any price and availability information displayed on http://www.amazon.com/ at the time of purchase will apply to the purchase of this product.
Availability: Not Available - stock arriving soon
Buy Now from Amazon
Product Information (more info)
CERTAIN CONTENT THAT APPEARS ON THIS SITE COMES FROM AMAZON SERVICES LLC. THIS CONTENT IS PROVIDED 'AS IS' AND IS SUBJECT TO CHANGE OR REMOVAL AT ANY TIME.

Brother and sister Enrique and Rosa flee persecution at home in Guatemala and journey north, through Mexico and on to the United States, with the dream of starting a new life. It s a story that happens every day, but until Gregory Nava's groundbreaking El Norte (The North), the personal travails of immigrants crossing the border to America had never been shown in the movies with such urgent humanism. A work of social realism imbued with dreamlike imagery, El Norte is a lovingly rendered, heartbreaking story of hope and survival, which critic Roger Ebert called a Grapes of Wrath for our time.

Nostalgia for the Light [Blu-ray]