Eclipse Series 7: Postwar Kurosawa (No Regrets for Our Youth / One Wonderful Sunday / Scandal / The Idiot / I Live in Fear) (The Criterion Collection) 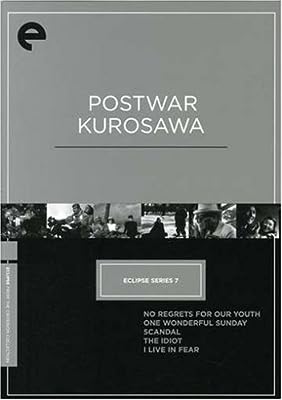 Price: $49.99
As of 2021-09-26 23:14:45 UTC (more info)
Product prices and availability are accurate as of 2021-09-26 23:14:45 UTC and are subject to change. Any price and availability information displayed on http://www.amazon.com/ at the time of purchase will apply to the purchase of this product.
Availability: Not Available - stock arriving soon
Buy Now from Amazon
Product Information (more info)
CERTAIN CONTENT THAT APPEARS ON THIS SITE COMES FROM AMAZON SERVICES LLC. THIS CONTENT IS PROVIDED 'AS IS' AND IS SUBJECT TO CHANGE OR REMOVAL AT ANY TIME.

Akira Kurosawa came into his own as a filmmaker directly following World War II, delving into the state of his devastated nation with a series of pensive, topical dramas. Amid Japan's economic collapse and U.S. occupation, Kurosawa managed to find humor and redemption existing alongside despair and anxiety. In these five early films, which range from political epic to Capraesque whimsy to courtroom potboiler, Kurosawa revealed the artistic range and social acuity that would mark his career and make him the most popular Japanese director in the world.

NO REGRETS FOR OUR YOUTH
Akira Kurosawa 1946
In Akira Kurosawa's first film after the end of World War II, future beloved Ozu regular Setsuko Hara gives an astonishing performance as Yukie, who transforms herself from genteel bourgeois daughter to independent social activist during a tumultuous decade in Japanese history.

ONE WONDERFUL SUNDAY
Akira Kurosawa 1947
This affectionate paean to young love is also a frank examination by Akira Kurosawa of the harsh realities of postwar Japan. During a Sunday trip into war-ravaged Tokyo, Yuzo and Masako look for work and lodging, as well as affordable entertainments to pass the time.

SCANDAL
Akira Kurosawa 1950
A handsome, suave Toshiro Mifune lights up the screen as painter Ichiro, whose circumstantial meeting with a famous singer is twisted by the tabloid press into a torrid affair. Ichiro files a lawsuit against the seedy gossip magazine, but his lawyer, Hiruta (Takashi Shimura), is playing both sides.

THE IDIOT
Akira Kurosawa 1951
THE IDIOT, an adaptation of Fyodor Dostoyevsky's masterpiece about a wayward, pure soul's reintegration into society updated by Kurosawa to capture Japan's postwar aimlessness was a victim of studio interference and public indifference. Today, this folly looks ever more fascinating.

I LIVE IN FEAR
Akira Kurosawa 1955
I LIVE IN FEAR presents Toshiro Mifune as an elderly, stubborn businessman so fearful of a nuclear attack that he resolves to move his reluctant family to South America. Kurosawa depicts a society emerging from the shadows but still terrorized by memories of the past and anxieties for the future.