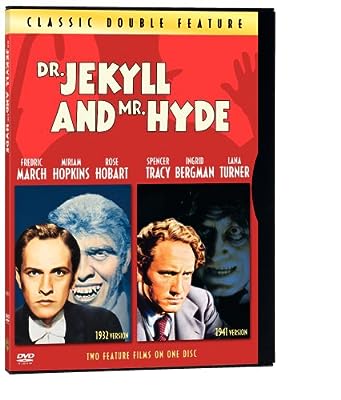 Price: $14.98
As of 2021-10-20 16:43:54 UTC (more info)
Product prices and availability are accurate as of 2021-10-20 16:43:54 UTC and are subject to change. Any price and availability information displayed on http://www.amazon.com/ at the time of purchase will apply to the purchase of this product.
Availability: Not Available - stock arriving soon
Buy Now from Amazon
Product Information (more info)
CERTAIN CONTENT THAT APPEARS ON THIS SITE COMES FROM AMAZON SERVICES LLC. THIS CONTENT IS PROVIDED 'AS IS' AND IS SUBJECT TO CHANGE OR REMOVAL AT ANY TIME.

Dr. Jekyll and Mr. Hyde (1931)
Fredric March won an Oscar® for playing the protagonist (and antagonist) of Robert Louis Stevenson's story. Dr. Henry Jekyll is an honorable man of science, albeit frustrated at the enforced celibacy of a delayed wedding date. Hyde is the fearsome creature he turns into after drinking a potion, and Hyde's appetites (mostly expressed with Miriam Hopkins's Cockney dance-hall wench) are decidedly unrestrained. March's performance is pretty theatrical, but it's fun to watch; his Hyde twitches and squawks and lopes around like an ape in a tuxedo. Rouben Mamoulian's direction has plenty of the brio of early-thirties Hollywood, and the transformations from Jekyll to Hyde are ingenious for the time. This film followed Dracula and Frankenstein into theaters by a few months, and it stands well with those horror classics--and it's a darn sight more fun (and much more down and dirty) than the 1941 MGM version of Stevenson's tale. --Robert Horton

Dr. Jekyll and Mr. Hyde (1941)
Classy MGM was not the studio most likely to make a horror movie in 1941, and in fact its production of Dr. Jekyll and Mr. Hyde ended up looking more like a glossy costume drama than a B-movie frightfest. The mood of Robert Louis Stevenson's tale of a divided doctor is ably captured in Joseph Ruttenberg's Oscar-nominated cinematography--more so, perhaps, than in Spencer Tracy's lead performance. Tracy wasn't especially happy about playing the role, although his transformations from good Dr. Jekyll to evil Dr. Hyde are convincing enough. One of the main reasons to see this version of the story is the young, impossibly beautiful Ingrid Bergman, then still a year shy of Casablanca. Bergman was cast in the good-girl part, but proved a shrewd judge of material, even this early in her Hollywood career; she finagled her way into playing the floozy instead, thus securing a more colorful acting platform than Lana Turner, who ended up in the more respectable role. Director Victor Fleming's previous movie was a little number called Gone with the Wind, and the Big Picture approach to that project may have influenced his work here--this Dr. Jekyll is just a bit too stately, too polished to really engage. The picture is so dignified it never cuts loose with the kind of wild invention that marked the 1932 version of the story, which won Fredric March an Oscar. It's the tale as imagined by Jekyll, rather than Hyde. --Robert Horton

Death Of A Salesman