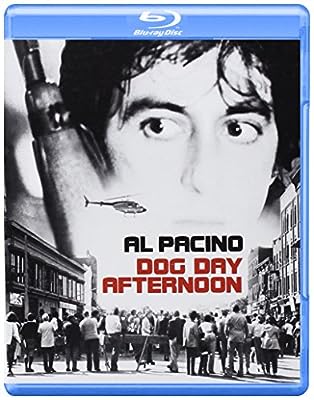 Price: $8.00
As of 2021-09-26 02:53:58 UTC (more info)
Product prices and availability are accurate as of 2021-09-26 02:53:58 UTC and are subject to change. Any price and availability information displayed on http://www.amazon.com/ at the time of purchase will apply to the purchase of this product.
Availability: Not Available - stock arriving soon
Buy Now from Amazon
Product Information (more info)
CERTAIN CONTENT THAT APPEARS ON THIS SITE COMES FROM AMAZON SERVICES LLC. THIS CONTENT IS PROVIDED 'AS IS' AND IS SUBJECT TO CHANGE OR REMOVAL AT ANY TIME.

A gripping true crime yarn, a juicy slice of overheated New York atmosphere, and a splendid showcase for its young actors, Dog Day Afternoon is a minor classic of the 1970s. The opening montage of New York street life (set to Elton John's lazy "Amoreena") establishes the oppressive mood of a scorching afternoon in the city with such immediacy that you can almost smell the garbage baking in the sun and the water from the hydrants evaporating from the sizzling pavement. Al Pacino plays Sonny, who, along with his rather slow-witted accomplice Sal (John Cazale, familiar as Pacino's Godfather brother Fredo), holds hostages after a botched a bank robbery. Sonny finds himself transformed into a rebel celebrity when his standoff with police (including lead negotiator Charles Durning) is covered live on local television. The movie doesn't appear to be about anything in particular, but it really conveys the feel of wild and unpredictable events unfolding before your eyes, and the whole picture is so convincing and involving that you're glued to the screen. An Oscar winner for original screenplay, Dog Day Afternoon was also nominated for best picture, actor, supporting actor (Chris Sarandon, as a surprise figure from Sonny's past), editing, and director (Sidney Lumet of Serpico, Prince of the City, The Verdict, and Running on Empty). --Jim Emerson