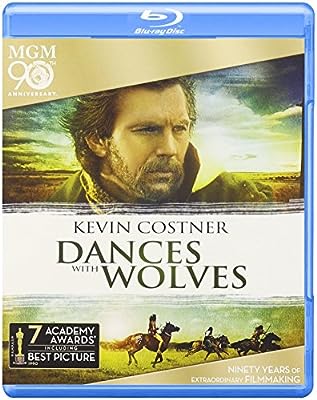 Price: $8.69
As of 2021-09-25 22:30:33 UTC (more info)
Product prices and availability are accurate as of 2021-09-25 22:30:33 UTC and are subject to change. Any price and availability information displayed on http://www.amazon.com/ at the time of purchase will apply to the purchase of this product.
Availability: Not Available - stock arriving soon
Buy Now from Amazon
Product Information (more info)
CERTAIN CONTENT THAT APPEARS ON THIS SITE COMES FROM AMAZON SERVICES LLC. THIS CONTENT IS PROVIDED 'AS IS' AND IS SUBJECT TO CHANGE OR REMOVAL AT ANY TIME.

Kevin Costner stars in and directs this triumphant masterpiece written by Michael Blake, based on his novel. On Blu-ray for the very first time, this breathtaking 20th Anniversary Edition includes an extended cut of the film and all-new exclusive extras. Winner of seven Academy Awards®, including Best Directing and Best Picture, this modern classic tells the story of Lt. Dunbar (Costner), a Civil War hero who befriends a tribe of Sioux Indians while stationed at a desolate outpost on the American frontier. What follows is a series of unforgettable moments – from Dunbar’s tender scenes with Stands With A Fist (Mary McDonnell), to the thrilling, action-packed buffalo hunt. Experience the excitement, emotion and sweeping beauty of this cinematic treasure as never before on Blu-ray!

Kevin Costner's 1990 epic won a bundle of Oscars for a moving, engrossing story of a white soldier (Costner) who singlehandedly mans a post in the 1870 Dakotas, and becomes a part of the Lakota Sioux community who live nearby. The film may not be a masterpiece, but it is far more than the sum of good intentions. The characters are strong, the development of relationships is both ambitious and careful, the love story between Costner and Mary McDonnell's character is captivating. Only the third-act portrait of white intruders as morons feels overbearing, but even that leads to a terribly moving conclusion. Costner's direction is assured, the balance of action and intimacy is perfect--what more could anyone want outside of an unqualified masterpiece? --Tom Keogh