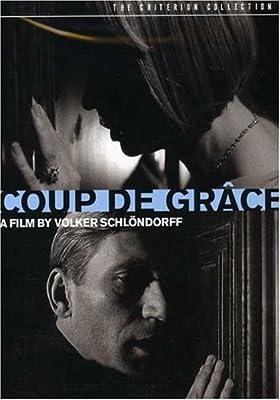 Price: $22.99
As of 2023-02-08 04:25:42 UTC (more info)
Product prices and availability are accurate as of 2023-02-08 04:25:42 UTC and are subject to change. Any price and availability information displayed on http://www.amazon.com/ at the time of purchase will apply to the purchase of this product.
Availability: Not Available - stock arriving soon
Buy Now from Amazon
Product Information (more info)
CERTAIN CONTENT THAT APPEARS ON THIS SITE COMES FROM AMAZON SERVICES LLC. THIS CONTENT IS PROVIDED 'AS IS' AND IS SUBJECT TO CHANGE OR REMOVAL AT ANY TIME.

Latvia, 1919: the end of the Russian Civil War. An aristocratic young woman (brilliantly played by Margarethe von Trotta) becomes involved with a sexually repressed Prussian soldier. When she is rejected by her love, the young woman is sent into a downward spiral of psychosexual depression, promiscuity, and revolutionary collaboration. A startling tale of heartbreak and violence set against the backdrop of bloody revolution, Volker Schlöndorff’s Le Coup de grâce is a powerful film that explores the interrelation of private passion and political commitment.

Passion and politics collide with tragically bleak results in Le Coup de Grace. Dedicating his film to French filmmaker Jean-Pierre Melville, director Volker Schlöndorff (The Tin Drum) emulates Melville's fascination with themes of war, adapting (with his wife and star, Margarethe von Trotta) the novel Der Fangschuß by Marguerite Yourcenar, set in Latvia in 1919 after the end of World War I. While sporadic fighting continues in the Baltic states, naive countess Sophie (von Trotta) seals her fate by falling in love with Erich (Matthias Habich), a Prussian soldier who secretly desires Sophie's brother (in one of several vaguely handled subplots). She retaliates by supporting the Communists and, when captured, demands that Erich be her executioner. Like the repressed emotions of its characters, the drama's power is nearly subdued by Schlondorff's murky ambiguity; it helps to be familiar with the film's historical context, but Le Coup de Grace is still a worthy companion to Schlöndorff's The Lost Honor of Katharina Blum, and a hauntingly atmospheric tale of wartime self-destruction. --Jeff Shannon