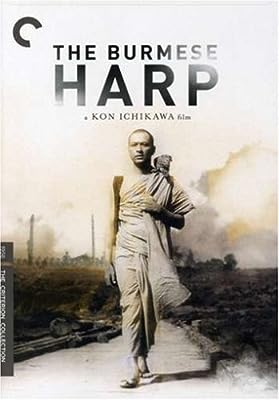 Price: $22.99
As of 2022-10-03 10:34:44 UTC (more info)
Product prices and availability are accurate as of 2022-10-03 10:34:44 UTC and are subject to change. Any price and availability information displayed on http://www.amazon.com/ at the time of purchase will apply to the purchase of this product.
Availability: Not Available - stock arriving soon
Buy Now from Amazon
Product Information (more info)
CERTAIN CONTENT THAT APPEARS ON THIS SITE COMES FROM AMAZON SERVICES LLC. THIS CONTENT IS PROVIDED 'AS IS' AND IS SUBJECT TO CHANGE OR REMOVAL AT ANY TIME.

Kon Ichikawa's Buddhist tale of peace, The Burmese Harp, is universally relevant in various eras and cultures, although it comments specifically on the destruction of Burma during World War II. Based on the novel by Michio Takeyama, The Burmese Harp stars a Japanese platoon stationed in Burma whose choir skills are inspired by their star musician, Private Mizushima (Rentaro Mikuni), who strums his harp to cheer the homesick soldiers. As the troop surrenders to the British and is interred in Mudon prison camp, Mizushima escapes to be faced with not only his imminent death, but also the deaths of thousands of other soldiers and civilians. Relinquishing his life as a military man, Mizushima retreats into a life of Buddhist prayer, dedicating himself to healing a wounded country. Filmed in black and white, strong visual contrasts heighten the divide between peace, war, life, and death in this highly symbolic film. Scenes in which the Japanese soldiers urge opposing forces to sing with them portray military men regardless of alliance as emotionally sensitive. Showing the humanistic aspects of war, such as the male bonding that occurs between soldiers, doesn't justify war as much as deepens its tragedy. This release includes interviews with the director and with Mikuni, further contextualizing its place in Japanese cinema. The Burmese Harp, with its lessons in compassion and selflessness, is so transformative that viewing it feels somewhat akin to a religious experience. --Trinie Dalton