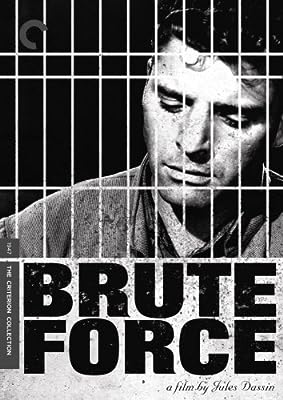 Price: $24.02
As of 2022-10-03 12:11:57 UTC (more info)
Product prices and availability are accurate as of 2022-10-03 12:11:57 UTC and are subject to change. Any price and availability information displayed on http://www.amazon.com/ at the time of purchase will apply to the purchase of this product.
Availability: Not Available - stock arriving soon
Buy Now from Amazon
Product Information (more info)
CERTAIN CONTENT THAT APPEARS ON THIS SITE COMES FROM AMAZON SERVICES LLC. THIS CONTENT IS PROVIDED 'AS IS' AND IS SUBJECT TO CHANGE OR REMOVAL AT ANY TIME.

A convict and his cellmates are driven to escape by hatred for the fascist warden. Directed by Jules Dassin.

Jules Dassin's brooding, brutal drama about a prison wound to the breaking point by a sadistic captain of the guards is a classic film noir as well as one of the greatest prison films ever made. Burt Lancaster (in only his third film but already commanding the screen like a pro) is the savvy prison veteran whose clashes with Hume Cronyn (the ambitious guard with a god complex) land him first in solitary then in the claustrophobic drain pipe, a muddy, airless work detail that slowly kills every man assigned to it. With the help of his cellmate buddies and former gangland boss Charles Bickford he hatches a plan to break out, but Cronyn has his own plans for the unbreakable prisoner. Dassin's oppressive prison is thick with atmosphere: cavernous buildings and halls that echo with the footsteps of inmates and the clanking of bars, overcrowded cells that seem to close in on the men, a busy machine shop where the film's most memorable scene takes place--the ruthless assassination of a stoolie in a pounding metal press. Cinematographer William Daniels, a master of Hollywood's soft-focus glamour, creates a harsh, hard-edged look for the film, softened only by looming shadows. A sense of doom hovers over everything, culminating in an explosive finale, but the barbaric, brutish violence hangs in the air long after the film is over. --Sean Axmaker

On the DVD
Criterion's beautiful restored print of Brute Force is accompanied by a small collection of supporting materials, including a commentary track by longtime film noir experts Alain Silver and James Ursini. They give a good brief on the film's history, such as the disagreements between producer Mark Hellinger and director Jules Dassin on the subject of the movie's use of flashbacks--an approach that would break the claustrophobia of the prison sequences and introduce female characters. Hellinger wanted the backstory, Dassin objected, and the producer won; but the point is definitely arguable. Prison-movie specialist Paul Mason gives a useful 15-minute talk, partly on Brute Force and partly on the genre of prison movies. Criterion's booklet has an excellent essay by critic Michael Atkinson, a vintage 1947 profile of the colorful columnist-turned-producer Hellinger, and an intriguing, bitter exchange of letters between Hellinger and Production Code chief Joseph Breen on the subject of the film's censorship problems. --Robert Horton

Bring Me the Head of Alfredo Garcia