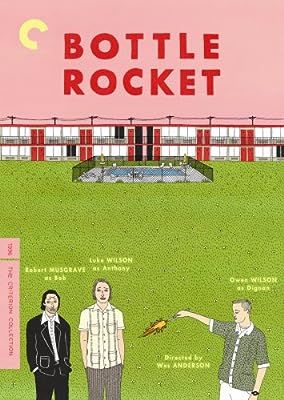 Price: $29.64
Availability: Not Available - stock arriving soon
Buy Now from Amazon
Product Information (more info)
CERTAIN CONTENT THAT APPEARS ON THIS SITE COMES FROM AMAZON SERVICES LLC. THIS CONTENT IS PROVIDED 'AS IS' AND IS SUBJECT TO CHANGE OR REMOVAL AT ANY TIME.

This quietly daffy comedy should have been an indie hit, but ended up ignored by audiences. Too bad; it's a wonderfully sustained caper movie about friends whose career choice is all wrong. Low-key Anthony (Luke Wilson) and high-strung Dignan (Owen C. Wilson--the two actors are brothers) are brought into a life of crime by Dignan's ambition to be a small-time thief. After a few amusingly laid-back trial burglaries, they (and a third buddy) find themselves over their heads when they hook up with an experienced crime boss (James Caan). Because this movie is so relentlessly deadpan, you really have to be dialed in to its brand of humor--but once there, Bottle Rocket shoots off plenty of sparks. Above all, Owen Wilson's portrayal of Dignan is a terrifically original comic creation; Dignan is so sincerely focused on his goals that he can't see how completely absurd his ideas are. Owen Wilson, who went on to supply similarly knuckle-headed performances in Armageddon and Permanent Midnight, wrote the screenplay with director Wes Anderson. --Robert Horton