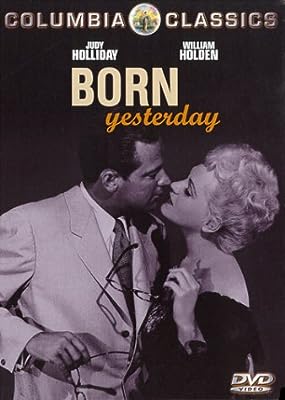 Price: $9.96
As of 2022-08-19 02:23:17 UTC (more info)
Product prices and availability are accurate as of 2022-08-19 02:23:17 UTC and are subject to change. Any price and availability information displayed on http://www.amazon.com/ at the time of purchase will apply to the purchase of this product.
Availability: Not Available - stock arriving soon
Buy Now from Amazon
Product Information (more info)
CERTAIN CONTENT THAT APPEARS ON THIS SITE COMES FROM AMAZON SERVICES LLC. THIS CONTENT IS PROVIDED 'AS IS' AND IS SUBJECT TO CHANGE OR REMOVAL AT ANY TIME.

Judy Holliday won the 1950 Best Actress Oscar(r) for her brilliant and funny role as Billie Dawn, thedumb blonde girlfriend of Harry Brock (Broderick Crawford), a corrupt millionaire junk dealer. Brock, a man with social ambitions and a willingness to do anything to fulfill them, is embarrassed by Billie's crass behavior and lack of social sophistication. So he arranges for her to take a crash course in culture from a handsome, young journalist (William Holden). Billie blossoms under his kind tutelage and becomes increasingly aware of her role as a pawn in Brock's crooked business deals. Brockis surprised and outraged when Billie suddenly refuses to cooperate any longer. This is a classic with unforgettable performances.

Judy Holliday's Oscar-winning performance is just one of the reasons to watch this terrific 1950 comedy, which is equally acclaimed for its deliciously witty screenplay (based on Garson Kanin's long-running Broadway hit) and George Cukor's silky-smooth direction. Holliday plays Billie Dawn, the floozie fiancée of a junk-dealer millionaire (Broderick Crawford), who is trying to make a good impression among the Washington, D.C., politicos he's hoping to influence. To ensure that Billie gets properly "culturefied," the corrupt Crawford hires a D.C. journalist (William Holden) to give the seemingly dim-witted blonde a crash course in politics, history, literature, and--you guessed it--true love. Billie's not nearly as dumb as she seems, of course, and before long she's graduated from pawn to sassy queen on her husband's political chessboard.

Watching Born Yesterday is a crash course in itself--an object lesson in how low American screen comedy has fallen from these delirious heights. The movie's funny even when there's a pause in the golden dialogue, such as when Holliday tests Crawford's patience in a sublimely comedic round of gin rummy. There's not a single scene in which Holliday (reprising her Broadway role) isn't simply perfect, the cogs turning smoothly behind her dim expressions and coarsely high-pitched squeal. Suave as ever, Holden is her match made in heaven, and Crawford is a brute who's too stupid to be genuinely malevolent. Put 'em all together and you've got a timeless classic, so flawless that a 1993 remake was instantly doomed to pale comparisons. --Jeff Shannon