Blood for Dracula (The Criterion Collection) 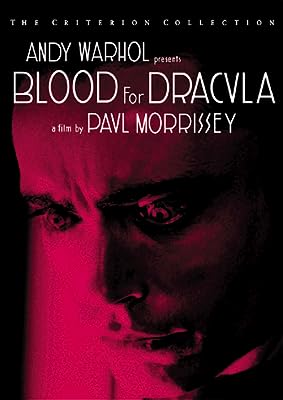 Price: $39.95
As of 2022-10-02 14:01:07 UTC (more info)
Product prices and availability are accurate as of 2022-10-02 14:01:07 UTC and are subject to change. Any price and availability information displayed on http://www.amazon.com/ at the time of purchase will apply to the purchase of this product.
Availability: Not Available - stock arriving soon
Buy Now from Amazon
Product Information (more info)
CERTAIN CONTENT THAT APPEARS ON THIS SITE COMES FROM AMAZON SERVICES LLC. THIS CONTENT IS PROVIDED 'AS IS' AND IS SUBJECT TO CHANGE OR REMOVAL AT ANY TIME.

Paul Morrissey's moralistic take on modern values is a brash mixture of humor, horror, and sex - and a revelation to fans of the horror film. In Blood for Dracula, the infamous count searches Italy for virgin blood. Criterion presents the long-suppressed director's cut of this outrageous cult classic in a new widescreen transfer.

Filming on Blood for Dracula began on location in Italy on the same day that filming of Flesh for Frankenstein ended, and knowing this enhances one's appreciation of director Paul Morrissey's delightfully twisted--and defiantly artistic--approach to violent, campy horror. Originally titled Andy Warhol's Frankenstein and Andy Warhol's Dracula, both films are blessed by Morrissey's opulent visual style (he and his Italian cinematographer worked wonders with modest budgets), and both showcase Udo Kier and the languorous hunk Joe Dallesandro in opposing roles. Here we find Udo Kier as Count Dracula, looking even more ashen than usual and desperate for the blood of virgins to restore his waning health. He travels to Italy and stays at the fading estate of a once-wealthy family, and the presence of four lovely, sexually inexperienced daughters turns out to be a recipe for disaster. It so happens that only the youngest daughter is actually a virgin, and by process of elimination Dracula discovers that non-virgin blood makes him violently ill! Dallesandro plays the resident handyman--handy in more ways than one, as the daughters have learned--who dares to protect the remaining virgin from the Count's bloodsucking exploits, and as usual director Morrissey finds ample opportunity to combine sex and gore with outrageous sensibility and logic of plot. As in the case of Flesh for Frankenstein, this Criterion Collection DVD restores the film to its original director's cut, presented in its original aspect ratio with a supplemental commentary by Morrissey, Kier, and critic Maurice Yacowar. Kier is particularly delightful, observing during one gruesome scene that "vomiting looks great when you've got a tuxedo on." --Jeff Shannon