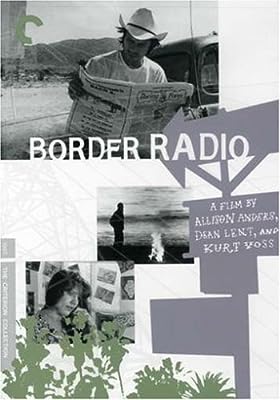 Price: $27.93
As of 2022-10-02 17:22:26 UTC (more info)
Product prices and availability are accurate as of 2022-10-02 17:22:26 UTC and are subject to change. Any price and availability information displayed on http://www.amazon.com/ at the time of purchase will apply to the purchase of this product.
Availability: Not Available - stock arriving soon
Buy Now from Amazon
Product Information (more info)
CERTAIN CONTENT THAT APPEARS ON THIS SITE COMES FROM AMAZON SERVICES LLC. THIS CONTENT IS PROVIDED 'AS IS' AND IS SUBJECT TO CHANGE OR REMOVAL AT ANY TIME.

Los Angeles rockers Jeff, Dean and Dave flee to Mexico and back after robbing a club owner who owes them.

As with Jim Jarmusch's Stranger than Paradise, Border Radio may be a small movie, but it marked the arrival of a significant talent. (Both debuts were also shot in black and white.) Co-directed by UCLA film students Kurt Voss, Dean Lent, and Allison Anders, it's a post-punk noir with documentary interludes. Chris D. (the Flesh Eaters) is Jeff Bailey, a name swiped from Robert Mitchum's character in Out of the Past. After the LA cult rocker steals money from a man named Skelley, he sends three hip thugs to collect ("The Clash are the cornerstone of social significance in rock and roll music," one insists. "It's just like dumb heavy metal," counters the other), so Jeff hightails it for Mexico. That leaves wife Luanna (Luanna Anders, Allison's sister) in the lurch. Bandmate Dean (X's John Doe), flaky roadie Chris (Chris Shearer), and Luanna spend the rest of the film trying to track him down. As for Anders, it would take another five years before Gas Food Lodging finally made her rep. With its low budget, four-year shoot, and ramshackle acting, Border Radio may be less technically adept than Repo Man, to name another film set in a similar milieu, but shares its anarchic spirit. And Lent's sundrenched 16mm cinematography and Blaster Dave Alvin's twangy score, fortified by tracks from Los Lobos and Green on Red, make it required viewing for fans of the LA punk scene, as well as the consistently underrated Anders. --Kathleen C. Fennessy

Blow Out (The Criterion Collection)