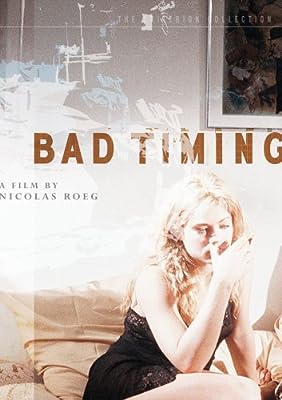 Price: $22.99
As of 2022-10-02 09:24:03 UTC (more info)
Product prices and availability are accurate as of 2022-10-02 09:24:03 UTC and are subject to change. Any price and availability information displayed on http://www.amazon.com/ at the time of purchase will apply to the purchase of this product.
Availability: Not Available - stock arriving soon
Buy Now from Amazon
Product Information (more info)
CERTAIN CONTENT THAT APPEARS ON THIS SITE COMES FROM AMAZON SERVICES LLC. THIS CONTENT IS PROVIDED 'AS IS' AND IS SUBJECT TO CHANGE OR REMOVAL AT ANY TIME.

Amid the decaying elegance of cold-war Vienna, psychoanalyst Dr. Alex Linden (Art Garfunkel) becomes mired in an erotically charged affair with the elusive Milena Flaherty (Theresa Russell). When their all consuming passion takes a life-threatening turn, Inspector Netusil (Harvey Keitel) is assigned to piece together the sordid details. Acclaimed for its innovative editing, raw performances, and stirring musical score, featuring Tom Waits, the Who, and Billie Holiday, Nicolas Roeg’s Bad Timing is a masterful, deeply disturbing foray into the dark world of sexual obsession.

A choppy, unsettling meditation on sexual obsession, Nicholas Roeg's Bad Timing stars Theresa Russell and Art Garfunkel as Milena and Alex, two lovers pursuing a torrid relationship in late-1970s Vienna. The movie opens with Milena being rushed to the hospital for an apparent suicide attempt. Alex, a psychology professor, proceeds to play it cool as he's questioned by Inspector Netusil (Harvey Keitel). As Milena fights for her life on the operating table, the story of how she and Alex came together is revealed in startlingly raw passages of lust and bursts of raw emotion. Roeg throws the narrative out of joint with flashbacks and jarring editing, skillfully turning this story of a love affair into a mystery. The scene in which Milena aggressively seduces Alex on a stairwell is a bravura, gutsy performance from Russell. What's even more startling is the odd casting of this film. After all, that is the bare backside of the guy who most famously provided harmonies on "Scarborough Fair." Roeg, clearly enamored with casting musicians in lead roles (David Bowie in The Man Who Fell to Earth and Mick Jagger in Performance) also approaches the editing of the film as though it were music, with abrupt, discordant cuts and strange juxtapositions. The film--of a tradition of sexually frank films like Bertolucci's Last Tango in Paris--is yet another reminder of how deeply filmmakers of the '70s were willing to mine human emotions, especially unpleasant ones. -- Ryan Boudinot