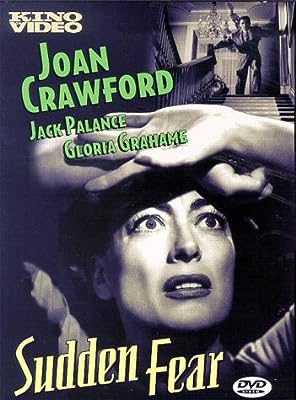 Price:
As of 2022-10-04 20:23:32 UTC (more info)
Product prices and availability are accurate as of 2022-10-04 20:23:32 UTC and are subject to change. Any price and availability information displayed on http://www.amazon.com/ at the time of purchase will apply to the purchase of this product.
Availability: Not Available - stock arriving soon
Buy Now from Amazon
Product Information (more info)
CERTAIN CONTENT THAT APPEARS ON THIS SITE COMES FROM AMAZON SERVICES LLC. THIS CONTENT IS PROVIDED 'AS IS' AND IS SUBJECT TO CHANGE OR REMOVAL AT ANY TIME.

Joan Crawford turns in one of the most emotionally charged performances of her career as a playwright who must use her plotting skills to save her own life, in this beautifully crafted film noir thriller. Nominated for four Academy Awards, Sudden Fear is an unbeatable combination of lush melodrama and drop-dead suspense.

Sudden Fear is one of those noir gems about a love-hate relationship between a husband and wife that's doomed from the very beginning. Jack Palance plays an ambitious actor rebuffed by playwright and heiress Joan Crawford. He later romances and marries her before falling under the dark spell of ex-girlfriend Gloria Grahame. When Palance and Grahame plot to get her fortune, the evil scheme backfires with ironically twisted results. Palance has no idea how much his wife truly loves him, and she has no idea how sinister he truly is. It's a fascinating if contrived film, with wonderful nuances and sensitive performances by the three leads. --Bill Desowitz