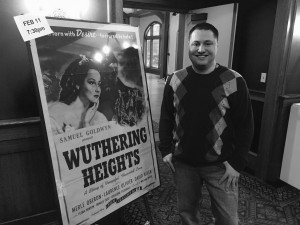 I have recently gotten an Internship at the Charles Allis Art Museum in Milwaukee! I will be co-hosting the Movie Time film series alongside Milwaukee films historian Dale E. Kuntz every other Wednesday. Dale Kuntz will be presenting a collection of classic American films from the 30's and 40's which are shown on 16mm, reel-to-reel film. Prior to each screening, Dale fascinates the audience with his vast knowledge on film history and trivia by giving them the inside scoop on each specific movie. As a bonus, on any Wednesday when a film is scheduled, general admission to the museum doubles as a movie ticket. Guests may choose to arrive early to visit the museum and then stay for the film. Bring a friend, check out our permanent collection and current exhibition, then grab a seat in the Great Hall of the museum and enjoy the show!

Every season Dale Kuntz changes the theme on the movies he presents. And so between January 14 through March 25th he'll be screening all the exceptional movies from 1935 to 1949 that DID NOT win the Best Picture Oscar. Motion picture and film historians often rate 1939 as "the greatest year in the history of Hollywood." The "Golden Year of film", 1939, the list of nominated films that did not win includes classics like Wuthering Heights (my favorite), Goodbye Mr. Chips, Stagecoach, Dark Victory, Mr. Smith Goes to Washington, The Wizard of Oz, Love Affair and Ninotchka. And that doesn't even include titles that weren't nominated for the Oscar like The Women, Destry Rides Again, Gunga Din, Young Mr. Lincoln, Only Angels Have Wings, Midnight, Of Mice and Men, The Hunchback of Notre Dame, The Roaring Twenties and The Four Feathers! Wow, what an exceptional year for movies! And so Dale Kuntz will happily give you some of the best 'losers' that unfortunately did not win between 1935-1949. For updates and a complete schedule of movie times click on this link. http://charlesallis.org/movietime.html I hope to see you all there!