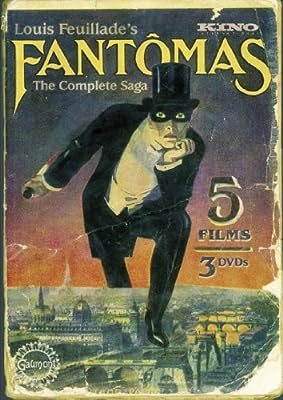 Price: $21.49
As of 2022-10-02 02:54:28 UTC (more info)
Product prices and availability are accurate as of 2022-10-02 02:54:28 UTC and are subject to change. Any price and availability information displayed on http://www.amazon.com/ at the time of purchase will apply to the purchase of this product.
Availability: Not Available - stock arriving soon
Buy Now from Amazon
Product Information (more info)
CERTAIN CONTENT THAT APPEARS ON THIS SITE COMES FROM AMAZON SERVICES LLC. THIS CONTENT IS PROVIDED 'AS IS' AND IS SUBJECT TO CHANGE OR REMOVAL AT ANY TIME.

The Fantômas series is a silent crime film serial consisting of five episodes (in a 3-Disc set), based on the novels of the same name, each an hour to an hour and a half in length, which end in cliffhangers, i.e., episodes one and three end with Fantomas making a last minute escape, the end of the second movie has Fantômas blowing up Lady Beltham's manor house with Juve and Fandor, the two heroes, still inside. The subsequent episodes begin with a recap of the story that has gone before. Each film is further divided into three or more chapters that do not end in cliffhangers.