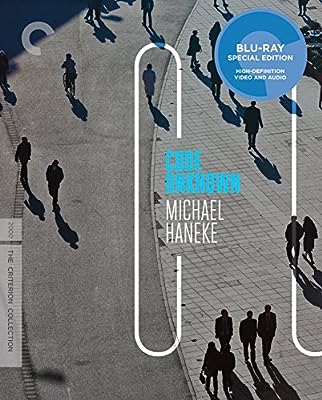 Price: $26.19
As of 2022-10-04 07:08:05 UTC (more info)
Product prices and availability are accurate as of 2022-10-04 07:08:05 UTC and are subject to change. Any price and availability information displayed on http://www.amazon.com/ at the time of purchase will apply to the purchase of this product.
Availability: Not Available - stock arriving soon
Buy Now from Amazon
Product Information (more info)
CERTAIN CONTENT THAT APPEARS ON THIS SITE COMES FROM AMAZON SERVICES LLC. THIS CONTENT IS PROVIDED 'AS IS' AND IS SUBJECT TO CHANGE OR REMOVAL AT ANY TIME.

One of the world’s most influential and provocative filmmakers, the Academy Award–winning Austrian director Michael Haneke (Amour) diagnoses the social maladies of contemporary Europe with devastating precision and staggering artistry. His 2000 drama Code Unknown, the first of his many films made in France, may be his most inspired work. Composed almost entirely of brilliantly shot, single-take vignettes focusing on characters connected to one seemingly minor incident on a Paris street, Haneke’s film—with an outstanding international cast headlined by Juliette Binoche (Three Colors: Blue)—is a revelatory take on racial inequality and the failure of communication in today’s increasingly diverse European landscape. DIRECTOR-APPROVED BLU-RAY SPECIAL EDITION FEATURES  • New, restored 2K digital transfer, approved by director Michael Haneke, with 5.1 surround DTS-HD Master Audio soundtrack • New interview with Haneke • Introduction by Haneke from 2001 • Filming Haneke, a 2000 making-of documentary featuring interviews with Haneke, actor Juliette Binoche, and producer Marin Karmitz, as well as on-set footage of cast and crew • Interview from 2001 in which Haneke discusses the filming of the boulevard sequences • New interview with film scholar Roy Grundmann • Trailers • New English subtitle translation • PLUS: An essay by critic Nick James