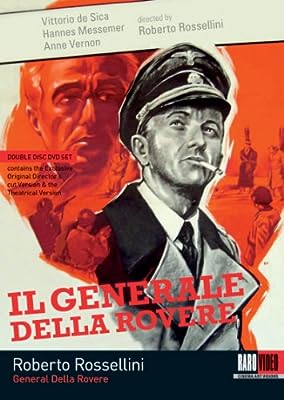 Price: $9.99
As of 2023-01-31 15:37:29 UTC (more info)
Product prices and availability are accurate as of 2023-01-31 15:37:29 UTC and are subject to change. Any price and availability information displayed on http://www.amazon.com/ at the time of purchase will apply to the purchase of this product.
Availability: Not Available - stock arriving soon
Buy Now from Amazon
Product Information (more info)
CERTAIN CONTENT THAT APPEARS ON THIS SITE COMES FROM AMAZON SERVICES LLC. THIS CONTENT IS PROVIDED 'AS IS' AND IS SUBJECT TO CHANGE OR REMOVAL AT ANY TIME.

In a magnetic performance, Academy Award nominee Vittorio De Sica (A Farewell to Arms) is Bardone, an opportunistic rascal in wartime Genoa, conning and cheating his fellow Italians, exploiting their tragedies by promising to help find their missing loved ones in exchange for money. But when the Nazis force him to impersonate a dead partisan general in prison to extract information from fellow inmates, Bardone finds himself wrestling with his conscience for the first time. Roberto Rossellini s gripping drama, among his most commercially popular films, is further evidence of the compassionate artistry of one cinema s most important voices. In Italian with English Subtitles.