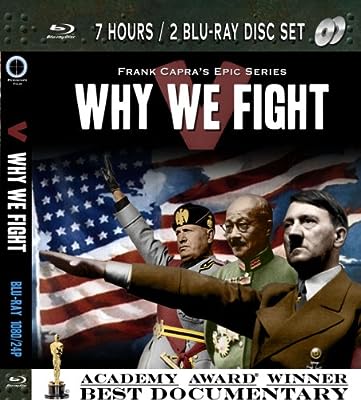 Price: $24.95
As of 2021-09-19 06:15:38 UTC (more info)
Product prices and availability are accurate as of 2021-09-19 06:15:38 UTC and are subject to change. Any price and availability information displayed on http://www.amazon.com/ at the time of purchase will apply to the purchase of this product.
Availability: Not Available - stock arriving soon
Buy Now from Amazon
Product Information (more info)
CERTAIN CONTENT THAT APPEARS ON THIS SITE COMES FROM AMAZON SERVICES LLC. THIS CONTENT IS PROVIDED 'AS IS' AND IS SUBJECT TO CHANGE OR REMOVAL AT ANY TIME.

One of the most important documentary series ever produced and winner of an Academy Award(r), Frank Capra's WHY WE FIGHT presents a compelling argument for U.S. involvement in World War II. Over the course of seven films, the history of fascist aggression is revealed and the reasons America must fight, underscored.
For millions of Americans, including newly drafted soldiers, WHY WE FIGHT was the most important piece of propaganda they would encounter during the war.
This deluxe two Blu-Ray set features all seven films in their entirety, in stunning 1080/24p high definition. It also includes two historic wartime shorts, totaling seven hours of entertainment.

Prelude to War (1942) examines the difference between democratic and fascist states, and covers the Japanese conquest of Manchuria and the Italian conquest of Ethiopia.
The Nazis Strike (1943) covers Nazi geopolitics and the conquest of Austria, Czechoslovakia and Poland.
Divide and Conquer (1943) the campaign in Benelux and the Fall of France.
The Battle of Britain (1943) depicts Britain's victory against the Luftwaffe.
The Battle of Russia (1943) shows a history of Russian defense and Russia's battle against Germany.
The Battle of China (1944) shows Japanese aggression such as the Nanking Massacre and Chinese efforts such as the construction of the Burma Road and the Battle of Changsha.
War Comes to America (1945) shows how the pattern of Axis aggression turned the American people against isolationism. Released just months before V-J Day, this film was intended to have a "Part II" sequel which was never produced.
Please note, due to the historic nature of these films, image quality and sound may vary. Presented in its original 4:3 pillarbox aspect ratio with monaural sound, in black and white.
Important: playback requires a Blu-Ray disc player.
"Academy Award" and the Award of Merit Statuette are registered copyrights and trademarks of the Academy of Motion Picture Arts and Sciences, all rights reserved.

Lady For A Day