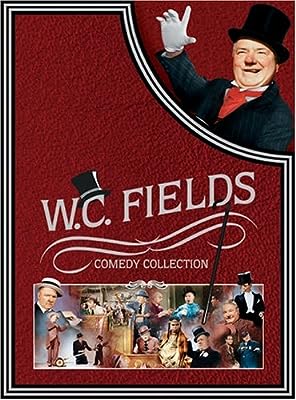 Price: $59.98
As of 2022-09-25 03:19:19 UTC (more info)
Product prices and availability are accurate as of 2022-09-25 03:19:19 UTC and are subject to change. Any price and availability information displayed on http://www.amazon.com/ at the time of purchase will apply to the purchase of this product.
Availability: Not Available - stock arriving soon
Buy Now from Amazon
Product Information (more info)
CERTAIN CONTENT THAT APPEARS ON THIS SITE COMES FROM AMAZON SERVICES LLC. THIS CONTENT IS PROVIDED 'AS IS' AND IS SUBJECT TO CHANGE OR REMOVAL AT ANY TIME.

W.C. Fields is an American original, the curmudgeonly master of wit and good, mean fun. In this collection of madcap classics, the famously top-hatted Fields unleashes his unique comic zing, proving himself the king of the one-liner. This special DVD collection includes The Bank Dick, My Little Chickadee, You Can't Cheat an Honest Man, It's a Gift and International House. The W.C. Fields Comedy Collection is Fields at his finest, and a must-have for anyone who loves to laugh!

For anyone who loves classic comedy, the W.C. Fields Comedy Collection is absolutely essential. Film for film, this may be the best DVD showcase ever devoted to a single comedian, including all five of Fields's acknowledged classics in a sturdy, beautifully designed library-quality slipcase. One could easily lament the relative lack of bonus features (it would have been nice to have some vintage Fields radio shows and newsreel footage), but the inclusion of A&E's 1994 Biography documentary W.C. Fields: Behind the Laughter is sufficiently informative about Fields's life, career, irascible personality, and tragic alcoholism. That's all that's really needed when the films themselves are so timelessly entertaining, and they're all remarkably pristine in sound and image quality. The best way to appreciate Fields's evolving screen persona is to view these films in chronological order: In International House (1933), Fields was merely one of many Paramount stars of screen and radio (including Rudy Vallee, Burns & Allen, Bela Lugosi, Sterling Holloway, and manic bandleader Cab Calloway), but he handily steals the show, invading a Shanghai hotel in his airplane/helicopter and delivering the classic line (to Franklin Pangborn), "Don't let the posy fool ya!" It's one of Paramount's best all-star revues.

It's a Gift (1934) is a remake of Fields's 1926 silent It's the Old Army Game, and was the first sound feature devoted to Fields's inimitable talent. As beleaguered husband and would-be orange farmer, Fields revives vintage routines from Vaudeville and Broadway, and his first encounter with Baby LeRoy is comedy gold. You Can't Cheat an Honest Man (1939) features Edgar Bergen and Charlie McCarthy and Fields's classic, still-hilarious ping-pong routine, while 1940's My Little Chickadee matches Fields (as "Guthbert J. Twillie") with Mae West, whose unforgettable on-screen banter with Fields shows no sign of their notorious off-screen animosity. In his raucous masterpiece The Bank Dick (also 1940), Fields is "Egbert Souse," lowly bank guard, unlikely hero, and manic driver in perhaps the greatest slapstick car-chase scene ever filmed. Despite the regrettable absence of Fields's final starring feature Never Give a Sucker an Even Break, this classy five-disc set is a veritable cornucopia of comedy, offering ample proof of Fields's comic genius through classic one-liners, physical routines, memorable costars, and perfect bits of business that never grow old. --Jeff Shannon