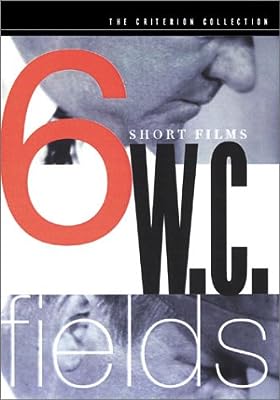 Price: $29.95
As of 2021-09-16 11:47:56 UTC (more info)
Product prices and availability are accurate as of 2021-09-16 11:47:56 UTC and are subject to change. Any price and availability information displayed on http://www.amazon.com/ at the time of purchase will apply to the purchase of this product.
Availability: Not Available - stock arriving soon
Buy Now from Amazon
Product Information (more info)
CERTAIN CONTENT THAT APPEARS ON THIS SITE COMES FROM AMAZON SERVICES LLC. THIS CONTENT IS PROVIDED 'AS IS' AND IS SUBJECT TO CHANGE OR REMOVAL AT ANY TIME.

W. C. Fields' prolific career placed him at the forefront of slapstick comedy. Gathered here are six gems that feature the comic genius at his peak: The Golf Specialist, Pool Sharks (silent), The Pharmacist, The Fatal Glass of Beer, The Barber Shop, and, of course, the notorious The Dentist. This unique collection will delight new generations of viewers with Fields' hilariously sardonic routines.

Ten years elapsed between W.C. Fields's debut in the 1915 short "The Pool Sharks" and his role in D.W. Griffith's Sally of the Sawdust, but it didn't take long for Fields to become one of the all-time great screen comedians. This essential collection--the silent "The Pool Sharks" plus the five "two-reeler" sound shorts that established Fields's acerbic style--provides a comprehensive document of the comedian's work in progress. "The Pool Sharks" develops a routine that Fields created in vaudeville and later perfected on film, with stop-motion animation used here to realize the comedian's wacky luck at billiards. It's a clever appetizer, but Fields was a verbal comic, so the two-reelers are the full-course meal.

Like the Marx brothers' The Cocoanuts a year earlier, 1930's "The Golf Specialist" mines humor from high jinks in sunny Florida, where Fields is nearly upstaged by a stone-faced golf caddy. The classic "The Dentist," despite the later addition of strident musical cues, is presented in its entirety, including an oft-censored bit in which Fields tugs a molar from a woman who's wrapped around him in a highly suggestive position. "The Pharmacist" and "The Barbershop" are variations on the theme, allowing Fields to toss off bons mots and scathing sarcasm, but it's the anomalous "The Fatal Glass of Beer"--a hilarious send-up of Yukon gold-rush adventures--that proves an unlikely highlight. It's typically sour-pussed in its agenda, with a running gag (involving the line "It ain't a fit night out for man nor beast") that just grows funnier with each repetition. Fields's comedy wasn't fully developed here--he became masterful in later features--but 6 Short Films is crucial in demonstrating his rapid refinement of the vintage Fields persona. --Jeff Shannon