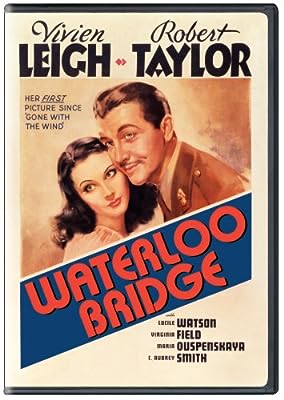 Price: $14.39
Availability: Not Available - stock arriving soon
Buy Now from Amazon
Product Information (more info)
CERTAIN CONTENT THAT APPEARS ON THIS SITE COMES FROM AMAZON SERVICES LLC. THIS CONTENT IS PROVIDED 'AS IS' AND IS SUBJECT TO CHANGE OR REMOVAL AT ANY TIME.

Academy Award winner Vivien Leigh stars as a ballet dancer who finds her greatest happiness and deepest sorry, her life and her death on London's Waterloo Bridge.Returning from the front during World War II, Captain Roy Cronin (Robert Taylor) remembers the woman he loved. Myra Lester (Leigh--Gone With the Wind, A Streetcar Named Desire), a corps de ballet dancer stole the heart of the wealthy officer, and the two planned to marry. But when Myra misses a performance to say good-bye to Roy as he goes away to fight, she loses her job with the ballet. And then hearing that Roy has been killed in battle, Myra is left penniless and alone--and descends into a life depending on the kindness of gentlemen who frequent the bridge, a dependency that takes her self-respect and, ultimately, her life in this heart-wrenching romance.

Mervyn LeRoy's 1940 remake of Waterloo Bridge, based on the play by Robert E. Sherwood, stars Robert Taylor as Scotsman Roy Conin, a middle-aged officer in the British army who reflects--on the eve of Britain's entry into World War II--on lost love during the last Great War. Told in flashback, Roy's ill-fated romance begins in a chance meeting with ballerina Myra Deauville (Vivien Leigh) during a London air raid. In less than two days, Roy's near-obnoxious, aristocratic self-confidence and boyish exuberance sweep Myra off her feet and she agrees to marry him before he ships out for duty in Germany. But there's no time for the wedding, and during what should be a happy first meeting with Roy's mother (Lucile Watson), Myra receives mistaken information that Roy is dead on a battleground. From there, Myra spirals downward into poverty and prostitution, until cruel fortune reveals that Roy is quite alive. While a tearjerker, Waterloo Bridge also says something about wartime conditions where women are caught between pressures of survival (especially where and when women have few options) and social values that condemn them for staying alive by any means. Told as delicately as possible, the film is directed with tasteful straightforwardness by LeRoy (Random Harvest) and the key performances by Taylor and Leigh strike exactly the right melodramatic but not bathetic pitch. Nice work, too, by Virginia Field as Myra's equally luckless friend. --Tom Keogh