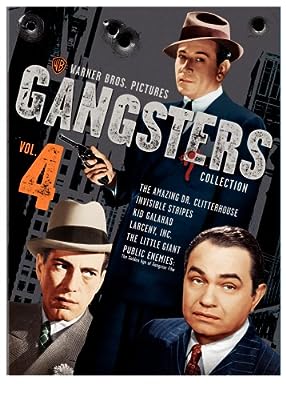 Price: $59.92
As of 2021-06-16 12:44:37 UTC (more info)
Product prices and availability are accurate as of 2021-06-16 12:44:37 UTC and are subject to change. Any price and availability information displayed on http://www.amazon.com/ at the time of purchase will apply to the purchase of this product.
Availability: Not Available - stock arriving soon
Buy Now from Amazon
Product Information (more info)
CERTAIN CONTENT THAT APPEARS ON THIS SITE COMES FROM AMAZON SERVICES LLC. THIS CONTENT IS PROVIDED 'AS IS' AND IS SUBJECT TO CHANGE OR REMOVAL AT ANY TIME.

THE AMAZING DR. CLITTERHOUSE Takes one to know one! Doctor Edward G. Robinson infiltrates a gang to study the ways of hoodlum Humphrey Bogart. LITTLE GIANT He got class, see? His bootleg beer biz is tapped out, so Robinson aims to join Santa Barbara’s polo set. LARCENY, INC. Bag the swag! Ex-jailbirds run a luggage shop while attempting to tunnel into the bank next door. Robinson, Broderick Crawford, Jane Wyman and Anthony Quinn star. INVISIBLE STRIPES Once a con always a criminal? Ex-yard mates Bogart and George Raft return to the life. With William Holden. KID GALAHAD “Best of the ’30s boxing movies”* stars Bogart, Robinson, Bette Davis and Wayne Morris (*David Shipman, The Story of Cinema). Bonus Disc: All-New WHV Feature-Length Documentary! PUBLIC ENEMIES: THE GOLDEN AGE OF THE GANGSTER FILM Times were tough. They were tougher. A fascinating new look at the mobsters, the movies and the studio that ruled the gangster genre.

The highlight of Warner's latest gangster collection is the best film since Vol. 1--the 1937 Kid Galahad. This is a terrific picture, among the studio's most satisfying offerings of the '30s, with unlikely co-stars Edward G. Robinson and Bette Davis establishing warm rapport as a fight promoter and his longtime lady friend, and director Michael Curtiz in championship form. Although it's only secondarily a gangster film--boxing and affairs of the heart top the bill--the potential for gangland violence is never far away thanks to Humphrey Bogart's steely malevolence as a rival boxing manager. Also featured are Wayne Morris, ingratiating as the farmboy who becomes Robinson's new fighter; Harry Carey as his trainer; and Jane Bryan--a Warner player who could do sweet and radiant without becoming cloying--as Robinson's young sister. Both she and city girl Davis--known in her social circle as "Fluff"--fall in love with Galahad, and the scene when they deal with that is smartly written (by Seton I. Miller) and played. Vol. 4 is virtually an Edward G. Robinson collection, since he stars in all but one of the movies. The set's other gem is The Amazing Dr. Clitterhouse (1938), an atypically glossy item with Robinson wonderfully droll as a Park Avenue doctor moonlighting as a jewel thief. He's doing research for a book on criminals, which leads to his becoming "the Professor," the brains behind a gang run by Claire Trevor and Humphrey Bogart (and including Allen Jenkins, Maxie Rosenbloom, Ward Bond, and Vladimir Sokoloff). Directed by Anatole Litvak, the movie's a milestone of sorts in the career of another filmmaker: co-screenwriter John Huston. Its coziness with criminality as "a left-handed form of human endeavor" anticipates Huston's great The Asphalt Jungle. Also, the picture marks his first association with Bogart, whose stardom he'd help to shape. And Bogart, Robinson, and Trevor would all be reunited under Huston's direction on Key Largo.

The Amazing Dr. Clitterhouse has its dark side; The Little Giant and Larceny, Inc. are broad comedies pure and simple. From the outset, Robinson chafed against his stereotyping in gangster roles, and The Little Giant (1933), as the title suggests, gave him the chance to turn "Little Caesar" on his head. With Franklin D. Roosevelt's election spelling doom for the bootlegging business, "Bugs" Ahern (Eddie G.) retires from mob life to get some culture and mingle with the swells on the polo fields of California. Roy Del Ruth directed, albeit with less pizzazz than usual. Larceny, Inc. (1942) finds newly paroled convicts Robinson and Broderick Crawford taking over a Manhattan luggage store that happens to sit next to a bank that, alas, economic setback may compel them to rob. The movie has its charms--inconveniently for their plans, the guys' business becomes a success and sparks a revival of their Gotham neighborhood--but it's distinctly inferior to the other gangster comedies in which Lloyd Bacon directed Robinson, A Slight Case of Murder (in Vol. 2) and Brother Orchid (Vol. 3). This was the final film Robinson made under his long Warner contract. (Incidentally, the audio commentary on it is bone-crushingly pedantic.) Lloyd Bacon also directed Invisible Stripes (1939), starring George Raft as a not-very-hardened criminal trying to go straight following a prison term. Trouble is, society keeps distrusting him, and when it appears his desperate younger brother (William Holden) might turn to crime, Raft agrees to abet his old prison-mate Humphrey Bogart on some holdups. At a double-feature-ready length of 80 minutes, Invisible Stripes feels like an A-movie struggling to break out of B constraints. There's some excellent stuff, as when garage mechanic Holden and the sweetheart (Jane Bryan) he can't afford to marry cross paths with wealthy revelers out on the town; and Raft and Bogart convincingly have a friendship above and beyond the obligations of genre plotting. But like the underdressed neighborhood street scenes (in contrast to the flavorful busyness customarily observed in Warner gangster pictures), mostly the movie leaves us wanting more. And that includes more of the gang's-all-here supporting cast: Paul Kelly, Marc Lawrence, Joseph Downing, Bert Hanlon, Frank Faylen, et al. Completing Vol. 4 is Public Enemies: The Golden Age of the Gangster Film (2008), a feature-length documentary that serves up solid history and astutely chosen clips, from The Great Train Robbery (1903) through GoodFellas (1990). A small army of commentators holds forth on the gangster film as "the myth for the urban immigrant," and there's lots of anecdotal material about not only icons Cagney, Robinson, and Bogart ("the badder bad guy" brought in as the two previous stars turned legit) but also key directors and writers. Tasty. --Richard T. Jameson

Withnail and I [Blu-ray]

What Ever Happened to Baby Jane? (Two-Di...