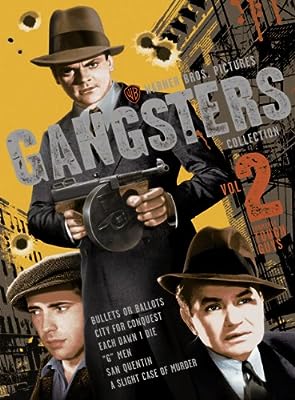 Price: $38.98
As of 2021-07-31 09:31:11 UTC (more info)
Product prices and availability are accurate as of 2021-07-31 09:31:11 UTC and are subject to change. Any price and availability information displayed on http://www.amazon.com/ at the time of purchase will apply to the purchase of this product.
Availability: Not Available - stock arriving soon
Buy Now from Amazon
Product Information (more info)
CERTAIN CONTENT THAT APPEARS ON THIS SITE COMES FROM AMAZON SERVICES LLC. THIS CONTENT IS PROVIDED 'AS IS' AND IS SUBJECT TO CHANGE OR REMOVAL AT ANY TIME.

Say "Warner Bros. in the '30s" and you're talking, first and foremost, about the tough, gritty, urban, street-smart movies that help define that American decade for us. Which means you're talking about James Cagney, Edward G. Robinson, and Humphrey Bogart: unpretty but charismatic guys with lived-in faces, and bodies that always seemed cocked, ready to spring. When one of them entered a room, he owned it, no matter how many people were there already. Their most celebrated habitat was the gangster picture. The genre didn't originate with them, but they, more than anybody else, defined it, gave it a face and a silhouette and a heartbeat.

The films in this set were produced half a decade and more after Little Caesar and The Public Enemy made stars of Robinson and Cagney, respectively, and after repeal had begun to lend Prohibition the patina of nostalgia. The studio's gangster franchise was evolving, and so were the careers of its top stars. When it came to toughness, the boys could still dish it out, and take it, too. But increasingly they were doing it on the other side of the law-and-order divide.

Cagney was first to reform. In 1935's "G" Men he plays a lawyer put through college by the avuncular neighborhood crimelord. After a law-school pal turned F.B.I. agent is murdered, Cagney abandons his (resolutely legit) one-man practice and joins the Bureau. The film memorializes several big moments in F.B.I. legend, but what's grabbiest is the personal drama growing out of Cagney's lingering underworld friendships. William Keighley directs the murders and shootouts with jolting ferocity, Barton MacLane and Edward Pawley supply flavorful villainy, and there are times when Sol Polito's cinematography literally glows (all these films have been restored, but "G" Men looks especially terrific). One gripe: The movie should have been presented without the F.B.I.-classroom intro tacked on for 1949 reissue (which belongs under "Special Features").

In Each Dawn I Die (also Keighley, 1939), Cagney teams with George Raft making his Warners debut. It's mostly a prison picture, with muckraking reporter Cagney behind bars after being framed by crooked politicos. Career felon Raft has little sympathy for him till Cagney proves to be a stand-up guy, whereupon the two bond in mutual loathing of sadistic guards, rat-fink convicts, and the endlessly malleable system. The movie boasts one indelible scene (involving a movie screening for the cons), some evocative prison workhouse detailing, and a fine Cagney performance as always. But it's undone by a script cluttered with melodrama and contrivance.

Bullets or Ballots (Keighley yet again, 1936) is much more satisfying. Again we get two icons for the price of one, with Robinson as a tough but square-shooting police detective and Bogart as the ambitious number-two man to a big-time racketeer. Bogart's effectively the co-star, albeit fourth-billed behind Robinson, Joan Blondell, and Barton MacLane. But it's Eddie G.'s movie, and he walks the line beautifully as an honest cop who, unjustly jettisoned from the force, signs on with the mobster he's long pursued. Despite a rhetorical reference to "ballots" as the public's means of combatting crime, it's bullets that get the job done. Bullets and fists: the movie makes clear that Robinson has beaten confessions out of people plenty of times, just as it has no illusions about the empty symbolism of crime commissions and grand juries.

The only other Bogart vehicle in the set is San Quentin (Lloyd Bacon, 1937), a scrap-work effort below the standards of everybody involved. Bogart's a small-time crook whose arrest at a nightclub occasions a meet-cute for his big sister Ann Sheridan and Army training officer Pat O'Brien--who's on his way to become yard captain at the penitentiary where Bogart will be interred! O'Brien tries to reform the lad, but with corrupt/sadistic guard Barton MacLane on one side and sociopathic con Joe Sawyer on the other, Bogart never has a chance. Neither does the viewer.

Lloyd Bacon, normally one of Warners' zippiest directors, is back on his game with A Slight Case of Murder (1938), a delicious gangster comedy. Robinson plays beer baron Remy Marco, who craves respectability as a legitimate businessman once beer is legal again. Problem is, nobody has ever had the heart to tell him his product tastes like varnish, and soon the bank is out to foreclose on his brewery. At which point Remy learns that his summer home upstate is full of fresh gangland corpses.... Based on a play by Damon Runyon and Howard Lindsay, the picture gives a trio of glorious goons--Allen Jenkins, Edward Brophy, and Harold Huber--a rare chance to shine as Marco's house staff.

City for Conquest (1940) ought to be the showpiece here. It's the longest and most ambitious entry, with prestige-picture scale and production values (including Polito and James Wong Howe as cameramen) and a cast including Cagney, Ann Sheridan, Arthur Kennedy, Frank McHugh, Donald Crisp, Anthony Quinn, Jerome Cowan, and--in his first of only two film performances--future directorial giant Elia Kazan. Working-stiff Cagney loves his gifted musician brother (Kennedy) and childhood sweetheart (Sheridan), a dancer with her own aspirations for the limelight; he becomes a boxer in order to pay for the brother's musical education. Triumph and tragedy ensue. The film's avowed aim, and Kennedy's, is to create an urban symphony of New York and the many little people striving against all odds to rise; there's even a one-man Greek chorus--Frank Craven, the Stage Manager of the recent Our Town--to hammer the theme periodically. But over the previous decade Warners' honest, hard-charging, small-scale movies had collectively achieved that "symphony," without the pompous flourishes Anatole Litvak's direction brings to the project. Here's hoping DVD showcases more of them. --Richard T. Jameson

Way We Were [Blu-ray]