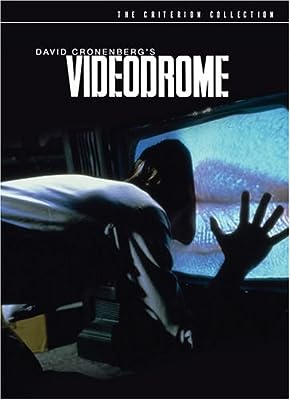 Price: $39.95
As of 2023-02-06 05:25:32 UTC (more info)
Product prices and availability are accurate as of 2023-02-06 05:25:32 UTC and are subject to change. Any price and availability information displayed on http://www.amazon.com/ at the time of purchase will apply to the purchase of this product.
Availability: Not Available - stock arriving soon
Buy Now from Amazon
Product Information (more info)
CERTAIN CONTENT THAT APPEARS ON THIS SITE COMES FROM AMAZON SERVICES LLC. THIS CONTENT IS PROVIDED 'AS IS' AND IS SUBJECT TO CHANGE OR REMOVAL AT ANY TIME.

When Max Renn goes looking for edgy new shows for his sleazy cable TV station, he stumbles across the pirate broadcast of a hyperviolent torture show called "Videodrome." As he unearths the origins of the program, he embarks on a hallucinatory journey into a shadow world of right-wing conspiracies, sadomasochistic sex games, and bodily transformation. Renn’s ordinary life dissolves around him, he finds himself at the center of a conflict between opposing factions in the struggle to control the truth behind the radical human future of "the New Flesh." Starring James Woods and Deborah Harry in one of her first film roles, Videodrome is one of writer/director David Cronenberg’s most original and provocative works, fusing social commentary with shocking elements of sex and violence. With groundbreaking special effects makeup by Academy Award®-winner Rick Baker, Videodrome has come to be regarded as one of the most influential and mind-bending science fiction films of the 1980s, and The Criterion Collection is proud to present it in its full-length unrated edition.