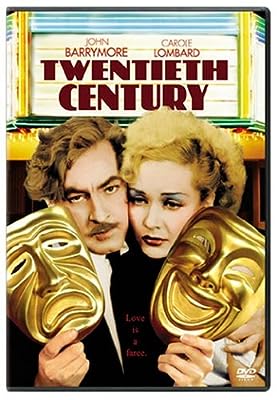 Price: $14.99
As of 2021-09-18 23:05:02 UTC (more info)
Product prices and availability are accurate as of 2021-09-18 23:05:02 UTC and are subject to change. Any price and availability information displayed on http://www.amazon.com/ at the time of purchase will apply to the purchase of this product.
Availability: Not Available - stock arriving soon
Buy Now from Amazon
Product Information (more info)
CERTAIN CONTENT THAT APPEARS ON THIS SITE COMES FROM AMAZON SERVICES LLC. THIS CONTENT IS PROVIDED 'AS IS' AND IS SUBJECT TO CHANGE OR REMOVAL AT ANY TIME.

Carole Lombard and John Barrymore star in this all-time classic screwball comedy based on the Charles MacArthurBen Hecht Broadway hit and directed by Howard Hawks. It's the story of a maniacal Broadway director (Barrymore) who transforms shopgirl Carole Lombard from a talented amateur to a smashing Great White Way success adored by public and press.

Screwball comedy was practically invented by this classic Howard Hawks picture, a breathless farce with not an ounce of sentimentality. John Barrymore, in magnificent form, plays egomaniacal Broadway producer Oscar Jaffe, who molds his latest protégé, Mildred Plotka, into elegant thee-a-tuh star Lily Garland (Carole Lombard). The last hour of the picture has Oscar and Lily, now on the outs, battling each other on the Chicago-to-New York train. These two marvelous creatures are quintessential Hawks characters, figures of pure style who can't exist without the adrenaline and spark so amply supplied by the Hecht-MacArthur script. Hawks's giddyup pacing anticipates Bringing Up Baby and His Girl Friday, and his deployment of character actors (notably Walter Connolly and Roscoe Karns, as Jaffe's long-suffering, oft-fired flunkies) is sublime. Barrymore and Lombard take it at full speed, grand and horrid and silly and probably meant for each other. --Robert Horton