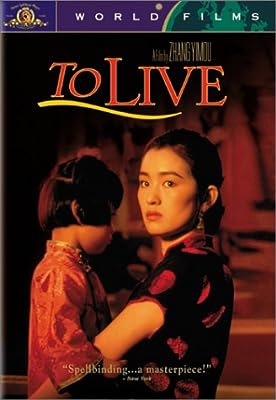 Price: $14.98
As of 2021-09-26 19:44:40 UTC (more info)
Product prices and availability are accurate as of 2021-09-26 19:44:40 UTC and are subject to change. Any price and availability information displayed on http://www.amazon.com/ at the time of purchase will apply to the purchase of this product.
Availability: Not Available - stock arriving soon
Buy Now from Amazon
Product Information (more info)
CERTAIN CONTENT THAT APPEARS ON THIS SITE COMES FROM AMAZON SERVICES LLC. THIS CONTENT IS PROVIDED 'AS IS' AND IS SUBJECT TO CHANGE OR REMOVAL AT ANY TIME.

The story of Fugui and Jiazhen, and their family's struggle for survival from the 1940's through the 1980's.
Genre: Foreign Film - Chinese
Rating: UN
Release Date: 24-JUL-2007
Media Type: DVD

One of the best films of 1994, To Live is a bold, energetic masterpiece from Zhang Yimou, the foremost director from China's influential "fifth generation" of filmmakers. Continuing his brilliant collaboration with China's best-known actress Gong Li (their previous films include Ju Dou and Raise the Red Lantern), Zhang weaves an ambitious tapestry of personal and political events, following the struggles of an impoverished husband and wife (Ge You, Gong Li) from their heyday in the 1940s to the hardships that accompanied the Cultural Revolution in the 1960s. They raise two children amidst a Communist regime, surviving numerous setbacks and yet managing, somehow, to live. Both intimate and epic, Zhang's film encompasses the simplest and most profound realities of Chinese life during this controversial period, and for their honesty, Zhang and Gong Li faced a two-year ban on future collaborations. To Live is a testament to their art, transcending politics to celebrate the tenacity of ordinary people in the wake of turbulent history. --Jeff Shannon