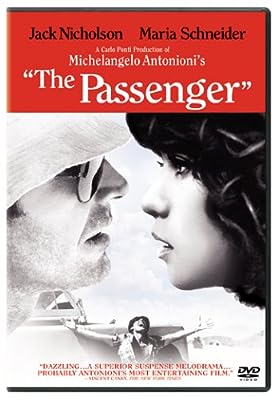 Price: $19.99
As of 2023-02-02 07:35:26 UTC (more info)
Product prices and availability are accurate as of 2023-02-02 07:35:26 UTC and are subject to change. Any price and availability information displayed on http://www.amazon.com/ at the time of purchase will apply to the purchase of this product.
Availability: Not Available - stock arriving soon
Buy Now from Amazon
Product Information (more info)
CERTAIN CONTENT THAT APPEARS ON THIS SITE COMES FROM AMAZON SERVICES LLC. THIS CONTENT IS PROVIDED 'AS IS' AND IS SUBJECT TO CHANGE OR REMOVAL AT ANY TIME.

Three-time Oscar(r)-winner Jack Nicholson (Best Actor, As Good As It Gets - 1997, One Flew Over the Cuckoo's Nest - 1975; Best Supporting Actor, Terms of Endearment - 1983) and iconic screen beauty Maria Schneider (Last Tango in Paris) star in THE PASSENGER, a cinematically brilliant romantic thriller written and directed by Oscar(r)-winning filmmaker Michelangelo Antonioni 1995 Honorary Award (Blow Up, L'Avventura). When a fellow traveler dies suddenly, burned-out journalist David Locke (Jack Nicholson) assumes his identity. Using the dead man's datebook as a guide, Locke travels throughout Europe and Africa, taking meetings with dangerous gun runners and falling for a beguiling young woman (Marie Schneider). But his exciting newfound freedom carries a fateful price as Locke realizes he is in over his head. Featuring a tour-de-force performance by Nicholson, THE PASSENGER won the Bodil Award in 1976 for Best European Film and was nominated for the Golden Palm at the 1975 Cannes Fi

The Passenger is one of those movies that is all about the vision of the director, in this case, screen legend Michelangelo Antonioni. Starring none other than Jack Nicholson, and featuring a plot billed as an international romantic thriller, The Passenger defies expectations by turning the genre on its head, making the characters and the story secondary to theme and tone. London-based Journalist David Locke (Nicholson) is working in North Africa when a fellow traveler by the name of David Robertson, who looks remarkably like him, happens to die suddenly. Burned out and depleted, Locke decides to assume the dead man’s identity, drops everything, and starts again as a new man with a new life. With no idea of who Robertson was or what he did for a living, Locke uses Robertson’s datebook as a guide as he travels through Europe and Africa, takes meetings with people he finds out are gun runners, and ends up falling for a beautiful young woman (Maria Schneider). As Robertson, David Locke thinks he has found an exhilirating new freedom, but the fact is he's in over his head: there are people looking for him and his life could be in danger.

The movie is a thriller in structure only. While designed for suspense, it’s just a premise for Antonioni to explore on themes of identity, humankind’s seemingly futile relationship to the world around us, and isolation. For Antonioni, the action is the means by which the image unfolds, and not the other way around. The actors and the plot are set pieces, simply smaller means to a larger end, and the image and atmosphere supersede all else. A slow pace, long, lingering shots, a focus on emptiness, and a detached, almost brutally objective point of view are the trademarks on full display here. Especially notable is the stunning seven-minute long shot in the final scene, one of the most famous in cinema history, which Nicholson, in his commentary, tags as an "Antonioni joke." It caps a crowning achievement by one of the big screen’s most visionary directors.

On the DVD:
The commentaries are most definitely welcome guides, and those looking for a way into the movie and into Antonioni’s head will really enjoy them. Jack Nicholson provides one commentary track where he generously shares his memories of the shoot, his thoughts on the movie thirty years on, and lets out the secret of how they managed to get the camera through the bars on the window for that seven-minute shot in the last scene. On the second commentary track, journalist Aurora Irvine and screenwriter Mark Peploe offer more of a wide-angle lens view of the movie and its place in history. Both are insightful narratives—Nicholson’s is particularly enjoyable--and make excellent additions to the DVD. --Daniel Vancini