The Major and the Minor (Universal Cinema Classics) 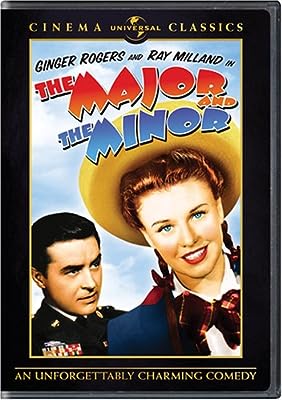 Price: $10.19
As of 2021-06-16 09:52:31 UTC (more info)
Product prices and availability are accurate as of 2021-06-16 09:52:31 UTC and are subject to change. Any price and availability information displayed on http://www.amazon.com/ at the time of purchase will apply to the purchase of this product.
Availability: Not Available - stock arriving soon
Buy Now from Amazon
Product Information (more info)
CERTAIN CONTENT THAT APPEARS ON THIS SITE COMES FROM AMAZON SERVICES LLC. THIS CONTENT IS PROVIDED 'AS IS' AND IS SUBJECT TO CHANGE OR REMOVAL AT ANY TIME.

Academy Award winners Ginger Rogers and Ray Milland sparkle in this debut comedy from Academy Award-winning writer-director Billy Wilder. A frustrated city girl (Rogers) decides to disguise herself as a youngster in order to get a cheaper train ticket home. But little "Sue Sue" finds herself in a whole heap of grown-up trouble when she hides out in a compartment with handsome Major Kirby (Milland) and he insists on taking her to his military academy after the train is stalled. This "memorable comedy" (Leonard Maltin's Classic Movie Guide) is a laugh-out-loud classic for all ages!