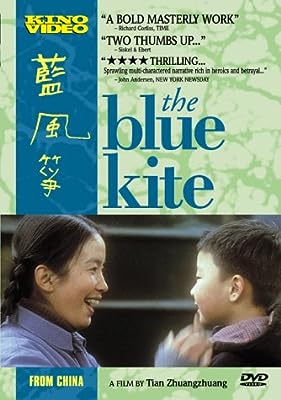 Price: $29.98
As of 2021-10-23 01:52:25 UTC (more info)
Product prices and availability are accurate as of 2021-10-23 01:52:25 UTC and are subject to change. Any price and availability information displayed on http://www.amazon.com/ at the time of purchase will apply to the purchase of this product.
Availability: Not Available - stock arriving soon
Buy Now from Amazon
Product Information (more info)
CERTAIN CONTENT THAT APPEARS ON THIS SITE COMES FROM AMAZON SERVICES LLC. THIS CONTENT IS PROVIDED 'AS IS' AND IS SUBJECT TO CHANGE OR REMOVAL AT ANY TIME.

Banned in China, where the director was under close government scrutiny for making the film without permission. The Blue Kite is the most acclaimed and controversial of all of the films to come out of the new Chinese cinema. Told from the perspective of a young boy. Tietou, it traces the fate of a Beijing family and their neighbors as they experience the political and social upheavals in 1950's and 60's China. Tietou's parents, a librarian and school teacher, both loyal communist party members, soon learn that even the most innocent criticisms can be interpreted by the Party as imperialist propaganda. Over the next fifteen years, Tietou observes the adverse effects of party policy on various members of his family. The only image of hope and freedom offered in the film is a blue kite give to Tietou by his father, which he later passes on to the next generation.