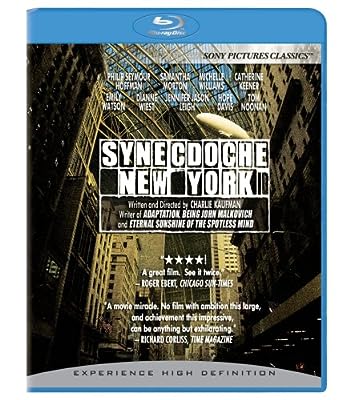 Price: $13.49
As of 2022-10-02 07:47:17 UTC (more info)
Product prices and availability are accurate as of 2022-10-02 07:47:17 UTC and are subject to change. Any price and availability information displayed on http://www.amazon.com/ at the time of purchase will apply to the purchase of this product.
Availability: Not Available - stock arriving soon
Buy Now from Amazon
Product Information (more info)
CERTAIN CONTENT THAT APPEARS ON THIS SITE COMES FROM AMAZON SERVICES LLC. THIS CONTENT IS PROVIDED 'AS IS' AND IS SUBJECT TO CHANGE OR REMOVAL AT ANY TIME.

From Charlie Kaufman, comes a visual and philosophic adventure, "SYNECDOCHE, NEW YORK". As he did with his groundbreaking scripts for "Being John Malkovich", "Adaptation", and "Eternal Sunshine of the Spotless Mind", Kaufman twists and subverts form and language as he delves into the mind of a man who, obsessed with his own mortality, sets out to construct a massive artistic enterprise that could give some meaning to his life. Theater director Caden Cotard (Philip Seymour Hoffman) is mounting a new play. His life catering to suburban blue-hairs at the local regional theater in Schenectady, New York is looking bleak. His wife Adele (Catherine Keener) has left him to pursue her painting in Berlin, taking their young daughter Olive with her. His therapist, Madeleine Gravis (Hope Davis), is better at plugging her best-seller than she is at counseling him. A new relationship with the alluringly candid Hazel (Samantha Morton) has prematurely run aground. And a mysterious condition is systema

An insanely ambitious, dazzling, maddening movie, Synecdoche, NY is the directorial debut of Charlie Kaufman, the inspired screenwriter of twisty, mind-bending movies like Being John Malkovich, Adaptation., and Eternal Sunshine of the Spotless Mind. Broadly summarized, it's about a director named Caden Cotard (Philip Seymour Hoffman) who, after his wife leaves him, sets out to create a theater production that will mirror all of life in New York City by literally recreating the city inside of a gigantic warehouse--including versions of his lover, his new wife, and himself, who become so entrenched in his life that eventually there must also be doubles of these doubles... which only describes a fragment of the intertwining storylines. At points even the most attentive viewers may feel confused by the sheer abundance and density of ideas and narrative threads, as the movie veers from mundanity to an exaggerated but not impossible reality to sheer surrealism. But by the end, though the movie folds in on itself multiple times and tries to encompass more of life than any movie can coherently contain, Synecdoche, NY comes to a remarkably full and resonant conclusion. Think of it as Kaufman's version of 8 1/2, another movie about creativity and a conflicted psyche. Hoffman's performance, solid but difficult to empathize with, is balanced by dozens of vivid characters played by an astonishing cast, including Samantha Morton, Catherine Keener, Jennifer Jason Leigh, Hope Davis, Michelle Williams, Dianne Wiest, Emily Watson, and more. Sprawling, flawed, both intimate and epic, Synecdoche, NY is a unique and impressive achievement that will reward (and perhaps even demands) multiple viewings. --Bret Fetzer