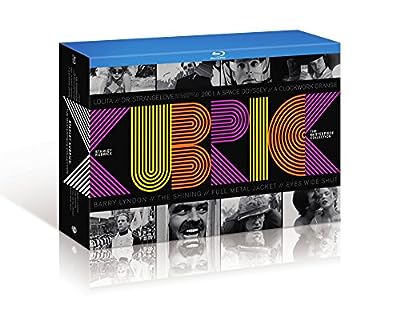 Price: $199.99
As of 2021-05-17 21:18:38 UTC (more info)
Product prices and availability are accurate as of 2021-05-17 21:18:38 UTC and are subject to change. Any price and availability information displayed on http://www.amazon.com/ at the time of purchase will apply to the purchase of this product.
Availability: Not Available - stock arriving soon
Buy Now from Amazon
Product Information (more info)
CERTAIN CONTENT THAT APPEARS ON THIS SITE COMES FROM AMAZON SERVICES LLC. THIS CONTENT IS PROVIDED 'AS IS' AND IS SUBJECT TO CHANGE OR REMOVAL AT ANY TIME.

Humbert (James Mason), a divorced British professor of French literature, travels to small-town America for a teaching position. He allows himself to be swept into a relationship with Charlotte Haze, his widowed and sexually famished landlady, whom he marries in order that he might pursue the woman's 14-year-old flirtatious daughter, Lolita, with whom he has fallen hopelessly in love, but whose affections shall be thwarted by a devious trickster named Clare Quilty.

The cold war satire is a chilling dark comedy about a psychotic Air Force General unleashing an ingenious, foolproof and irrevocable scheme sending bombers to attack Russia, as the U.S. President works with the Soviet premier in a desperate effort to save the world. The film stars Peter Sellers, in multiple roles, as well as George C. Scott and Sterling Hayden.

Kubrick’s dazzling Academy Award®-winning achievement (Special Visual Effects) is an allegorical puzzle on the evolution of man and a compelling drama of man vs. machine. Featuring a stunning meld of music and motion, the film was also Oscar®-nominated for Best Director, Art Direction and Writing. The director (who co-wrote the screenplay with Arthur C. Clarke) first visits the prehistoric age-ancestry past, then leaps millennia (via one of the most mind-blowing jump cuts ever) into colonized space, and ultimately whisks astronaut Bowman (Keir Dullea) into uncharted space, perhaps even into immortality.

Redmond Barry (Ryan O’Neal) is a young, roguish Irishman who's determined, in any way, to make a life for himself as a wealthy nobleman. Enlisting in the British Army and fighting in Europe’s Seven Years War, Barry deserts, then joins the Prussian army, gets promoted to the rank of a spy, and becomes a pupil to a Chevalier and con artist/gambler. Barry then lies, dupes, duels and seduces his way up the social ladder, entering into a lustful but loveless marriage to a wealthy countess named Lady Lyndon (Marisa Berenson). He takes the name of Barry Lyndon, settles in England with wealth and power beyond his wildest dreams, before eventually falling into ruin.

From a script he co-adapted from the Stephen King novel, Kubrick melds vivid performances, menacing settings, dreamlike tracking shots and shock after shock into a milestone of the macabre. The Shining is the director’s epic tale of a man in a snowbound hotel descending into murderous delusions. In a signature role, Jack Nicholson (“Heeeere’s Johnny!”) stars as Jack Torrance, who’s come to the elegant, isolated Overlook Hotel as off-season caretaker with his wife (Shelley Duvall) and son (Danny Lloyd).

A superb ensemble falls in for Stanley Kubrick’s brilliant saga about the Vietnam War and the dehumanizing process that turns people into trained killers. The scathing indictment of a film was nominated for an Academy Award for Best Screenplay. ‘Joker’ (Matthew Modine), ‘Animal Mother’ (Adam Baldwin), ‘Gomer’ (Vincent D’Onofrio), ‘Eightball’ (Dorian Harewood) and ‘Cowboy’ (Arliss Howard) are some of the Marine recruits experiencing boot-camp hell under the punishing command of the foul-mouthed Sergeant Hartman (R. Lee Ermy). The action is savage, the story unsparing, and the dialogue is spiked with scathing humor.

Kubrick’s daring and controversial last film is a bracing psychosexual journey through a haunting dreamscape, a riveting suspense tale and a career milestone for stars Tom Cruise and Nicole Kidman. Cruise plays a doctor who plunges into an erotic foray that threatens his marriage – and may ensnare him in a murder mystery – after his wife’s (Kidman) admission of sexual longings. As the story sweeps from doubt and fear to self-discovery and reconciliation, Kubrick orchestrates it with masterful flourishes. His graceful tracking shots, rich colors and startling images are some of the bravura traits that show Kubrick as a filmmaker for the ages.

Stanley Kubrick’s career comes into sharp focus in the compelling and revealing documentary narrated by Tom Cruise.  A detailed picture of the cinematic legend emerges via fascinating footage of Kubrick in his early years, at work on film sets and at home, and via candid commentary from collaborators, colleagues, and family.  From the music he chose to the cameras he used to his unrealized projects (including A.I. Artificial Intelligence, the much- anticipated Kubrick project directed by Steven Spielberg), you’ll uncover a treasure trove of film-buff information.  Drawing on Kubrick archives, it offers for the first time a truly intimate portrait of his life among family and friends.  There has never been a more essential visual companion piece to the man and his movies.

·         O’ Lucky Malcolm!
Documentary about the life and career of actor Malcolm McDowell produced and directed by Jan Harlan.

·         Kubrick Remembered – NEW
A new look into the Kubrick archives, with special appearances by Christiane Kubrick. Featuring never-seen footage of Stanley’s works, his house and his film production facilities.

·         Stanley Kubrick in Focus – NEW to Blu-ray
Spielberg, Soderbergh, Stone, Friedkin, Scorsese and others tell how Kubrick’s directorial style influenced them and how his unique style was developed.

Co-written by critic Michel Ciment and featuring interviews with a psychologist and a sociologist, Once Upon a Time … ‘A Clockwork Orange’ is a wonderfully unusual cine-documentary that focuses more on the titular movie’s historical context and philosophy than on its production and reception. The documentary benefits from archival audio commentary by the late Stanley Kubrick, who offers his rationale for making the controversial, devilishly prescient proto-punk cult classic: “Better to reign in hell than serve in heaven.”