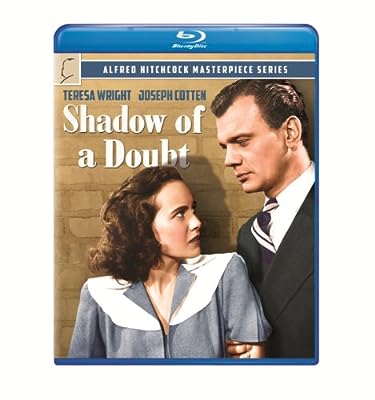 Price: $14.99
As of 2023-02-06 05:11:48 UTC (more info)
Product prices and availability are accurate as of 2023-02-06 05:11:48 UTC and are subject to change. Any price and availability information displayed on http://www.amazon.com/ at the time of purchase will apply to the purchase of this product.
Availability: Not Available - stock arriving soon
Buy Now from Amazon
Product Information (more info)
CERTAIN CONTENT THAT APPEARS ON THIS SITE COMES FROM AMAZON SERVICES LLC. THIS CONTENT IS PROVIDED 'AS IS' AND IS SUBJECT TO CHANGE OR REMOVAL AT ANY TIME.

One of Alfred Hitchcock’s most chilling films, Shadow of a Doubt, was considered a personal favorite by the director himself. After her charming Uncle Charlie (Joseph Cotton) comes to visit in the sleepy town of Santa Rosa, his favorite niece and namesake, “Young Charlie” (Teresa Wright), begins to suspect him of being the infamous Merry Widow murderer. As she draws closer to the truth, a dangerous game of cat-and-mouse begins leading to a shocking climax in this riveting psychological thriller from the Master of Suspense.