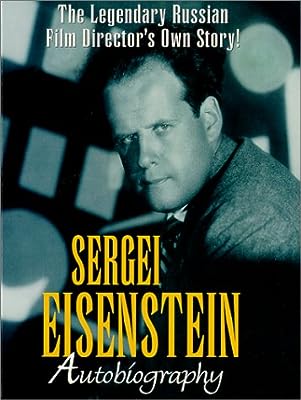 Price: $5.94
As of 2023-02-01 06:04:25 UTC (more info)
Product prices and availability are accurate as of 2023-02-01 06:04:25 UTC and are subject to change. Any price and availability information displayed on http://www.amazon.com/ at the time of purchase will apply to the purchase of this product.
Availability: Not Available - stock arriving soon
Buy Now from Amazon
Product Information (more info)
CERTAIN CONTENT THAT APPEARS ON THIS SITE COMES FROM AMAZON SERVICES LLC. THIS CONTENT IS PROVIDED 'AS IS' AND IS SUBJECT TO CHANGE OR REMOVAL AT ANY TIME.

A film dedicated to the 100th anniversary of cinema and the 100th anniversary of the birth of Sergei Eisenstein, one of film's greatest pioneers. The first screen version of Eisenstein's memoirs, Autobiography includes clips from his and some of his contemporaries' films, rare archival footage of Eisenstein himself and personal reminiscences. All this reflects the inner world of the great film director as he struggled through two Russian revolutions and Stalin's terror. English: Mono. 92 minutes.

The great Russian film director Sergei Eisenstein, whose Potemkin, Alexander Nevsky, and Ivan the Terrible stand as masterpieces of world cinema, is the subject of this eccentric and puzzling production. Though based on memoirs Eisenstein wrote before his death in 1948, most of this film is barely a documentary at all, but rather a composite of images, many of which are fascinating and arresting. Eisenstein himself was known for startling and memorable images (perhaps the most famous of which is the shot of the baby carriage rolling down the steps in Potemkin), so memorializing him with clips from his own films interspersed with readings from his memoirs seems somewhat appropriate. But the voice-over in Russian (with English subtitles) is quite sparse, and at times the images onscreen, which include clips from Buster Keaton films and Hollywood musicals from the 1930s, are utterly mystifying. This apparent attempt to tell the great filmmaker's life story by utilizing a myriad of images is, in fairness, often captivating, and many of the images used are stunning. But someone looking for a more conventional documentary that teaches about Eisenstein's life and work may be visually pleased but ultimately disappointed. --Robert J. McNamara