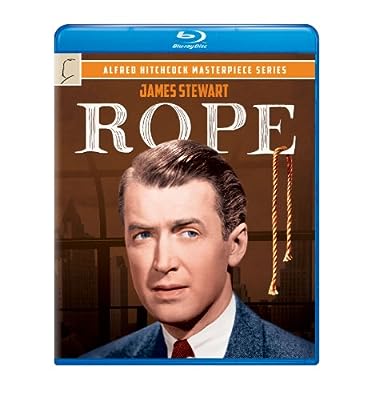 Price: $14.99
As of 2021-09-19 00:43:28 UTC (more info)
Product prices and availability are accurate as of 2021-09-19 00:43:28 UTC and are subject to change. Any price and availability information displayed on http://www.amazon.com/ at the time of purchase will apply to the purchase of this product.
Availability: Not Available - stock arriving soon
Buy Now from Amazon
Product Information (more info)
CERTAIN CONTENT THAT APPEARS ON THIS SITE COMES FROM AMAZON SERVICES LLC. THIS CONTENT IS PROVIDED 'AS IS' AND IS SUBJECT TO CHANGE OR REMOVAL AT ANY TIME.

Inspired by a real-life murder case, Alfred Hitchcock’s Rope is a shocking spellbinder starring James Stewart. Two friends (Farley Granger and John Dall) strangle a classmate for intellectual thrills and then proceed to throw a party for the victim’s family and friends - with the body stuffed inside the trunk they use for a buffet table. As the killers turn the conversation to committing the “perfect murder”, their former teacher (Stewart) becomes increasingly suspicious that his students have turned his intellectual theories into brutal reality. Filmed in only nine different takes almost entirely on a single sound stage, the first color film from the Master of Suspense is a chilling look into the dark side of humanity.