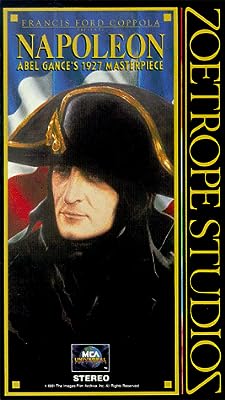 Price: $29.98
As of 2023-02-02 14:10:27 UTC (more info)
Product prices and availability are accurate as of 2023-02-02 14:10:27 UTC and are subject to change. Any price and availability information displayed on http://www.amazon.com/ at the time of purchase will apply to the purchase of this product.
Availability: Not Available - stock arriving soon
Buy Now from Amazon
Product Information (more info)
CERTAIN CONTENT THAT APPEARS ON THIS SITE COMES FROM AMAZON SERVICES LLC. THIS CONTENT IS PROVIDED 'AS IS' AND IS SUBJECT TO CHANGE OR REMOVAL AT ANY TIME.

Abel Gance's 1927 masterpiece is absolutely indispensable for silent-film buffs or anyone interested in classic world cinema. From the future emperor's first strategic victory, a schoolyard snowball fight, to the climactic invasion of Italy, Napoleon truly rules! This is no static, antiquated relic. Among Gance's innovations was to free the camera (for one battle scene, he had it mounted on horseback!). The film's justly celebrated climax features a triptych of synchronized images that anticipates by more than 30 years Cinerama and widescreen. But more than a triumph of filmmaking, Napoleon is a triumph of film restoration and was a boon to the vital cause of film preservation. Gance's movie was long thought lost. But historian Kevin Brownlow, with the cooperation of film archives from around the world, spent more than a decade painstakingly reassembling it. Francis Ford Coppola's name (not to mention a reported quarter of a million of his dollars) helped find Napoleon the audience this film so richly deserves. The rousing score was composed by Coppola's father, Carmine. Viva la Gance! --Donald Liebenson

Nothing Sacred: Kino Classics Edition [B...