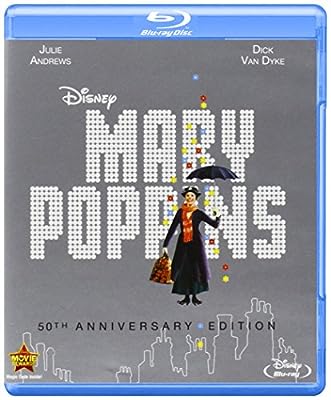 Price: $13.79
As of 2021-07-28 11:39:40 UTC (more info)
Product prices and availability are accurate as of 2021-07-28 11:39:40 UTC and are subject to change. Any price and availability information displayed on http://www.amazon.com/ at the time of purchase will apply to the purchase of this product.
Availability: Not Available - stock arriving soon
Buy Now from Amazon
Product Information (more info)
CERTAIN CONTENT THAT APPEARS ON THIS SITE COMES FROM AMAZON SERVICES LLC. THIS CONTENT IS PROVIDED 'AS IS' AND IS SUBJECT TO CHANGE OR REMOVAL AT ANY TIME.

Released from the Disney Vault in celebration of its 50th Anniversary, this beloved classic shines like never before on Blu-ray with an all-new digital restoration. Winner of five Academy Awards(R), including Best Actress (Julie Andrews), Best Song (“Chim Chim Cher-ee”) and Best Visual Effects, Mary Poppins is a movie experience your family will enjoy over and over again.

“Practically Perfect In Every Way” Mary Poppins flies out of the windy London skies and into the home of two mischievous children. With the help of a carefree chimney sweep named Bert (Dick Van Dyke), the spirited nanny turns every chore into a game and every day into a “Jolly Holiday.” Share the music, share the magic, share the joy of Mary Poppins with a whole new generation for the first time on Disney Blu-ray.The movie received 13 Academy Award(R) nominations and won 5 Oscars(R) for Best Actress, Best Song, Best Music Score, Best Film Editing, and Best Special Visual Effects. It also received a special scientific award for the creation and application of Color Traveling Matte Composite Cinematography, which helped make the combination of live action and animated actors in the film possible.