Kiss Me Deadly (The Criterion Collection) 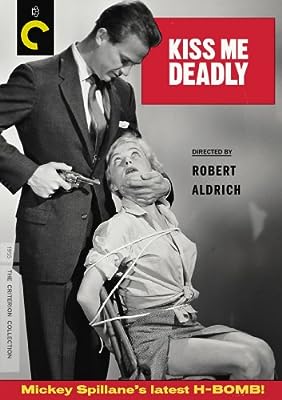 Price: $18.01
As of 2023-02-06 11:55:03 UTC (more info)
Product prices and availability are accurate as of 2023-02-06 11:55:03 UTC and are subject to change. Any price and availability information displayed on http://www.amazon.com/ at the time of purchase will apply to the purchase of this product.
Availability: Not Available - stock arriving soon
Buy Now from Amazon
Product Information (more info)
CERTAIN CONTENT THAT APPEARS ON THIS SITE COMES FROM AMAZON SERVICES LLC. THIS CONTENT IS PROVIDED 'AS IS' AND IS SUBJECT TO CHANGE OR REMOVAL AT ANY TIME.

In this atomic adaptation of Mickey Spillane’s novel, directed by Robert Aldrich (What Ever Happened to Baby Jane?, The Dirty Dozen), the good manners of the 1950s are blown to smithereens. Ralph Meeker (Paths of Glory, The Dirty Dozen) stars as snarling private dick Mike Hammer, whose decision one dark, lonely night to pick up a hitchhiking woman sends him down some terrifying byways. Brazen and bleak, Kiss Me Deadly is a film noir masterpiece as well as an essential piece of cold war paranoia, and it features as nervy an ending as has ever been seen in American cinema.