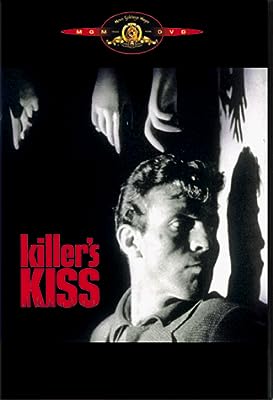 Price: $3.98
As of 2021-05-17 16:34:48 UTC (more info)
Product prices and availability are accurate as of 2021-05-17 16:34:48 UTC and are subject to change. Any price and availability information displayed on http://www.amazon.com/ at the time of purchase will apply to the purchase of this product.
Availability: Not Available - stock arriving soon
Buy Now from Amazon
Product Information (more info)
CERTAIN CONTENT THAT APPEARS ON THIS SITE COMES FROM AMAZON SERVICES LLC. THIS CONTENT IS PROVIDED 'AS IS' AND IS SUBJECT TO CHANGE OR REMOVAL AT ANY TIME.

Stanley Kubrick's second feature film, Killer's Kiss, made the world take notice. The young moviemaker won acclaim for this dazzling film noir about a struggling New York boxer (Jamie Smith) whose life is imperiled when he protects a nightclub dancer (Irene Kane) from her gangster boss (Frank Silvera). "Using his camera as a sandpaper block, Kubrick has stripped away the veneer from the prizefight and dancehall worlds," the New York Mirror proclaimed. Killer's Kissnot only lends considerable insight into future Kubrick classicssuch as The Killing and Full Metal Jacketbut it is also a remarkable film in its own right: the boxing match may bethe most vicious this side of Raging Bull, and the famed final battle remains an action tour-de-force. "An ambitious photographer...challenges the movie capital with Killer's Kiss," theNew York Daily News enthused. "The suspenseful venture augurs well for young Stanley Kubrick!"

Stanley Kubrick wrote the story and produced, edited, shot, and directed his second feature like a one-man studio, and his developing cinematic intelligence turns an otherwise unremarkable story into a memorable if slight film, a hint at masterpieces to come. Jamie Smith is a washed up prizefighter who rushes to the rescue of his platinum blonde dime-a-dancer neighbor (Irene Kane) when she's attacked by her dapper hoodlum boss (Frank Silvera). Smith and Kane fall in love, but their plans to leave gritty New York for a simpler life in Seattle are jeopardized when jealous Silvera sends his thugs to lean on Smith. Mistaken identities and an overzealous beating lead to murder, kidnapping, and a desperate confrontation between Smith and Silvera in an eerie warehouse full of mannequins. Disembodied heads, swinging hands, and the blank stares of rows of lifeless dummies become a cold counterpoint to the sweaty, almost primal fight as Silvera wields an ax and Smith counters with a pike like gladiators in an abstract arena. The gray cityscape of New York (shot on location) turns into stark black and white and the city looms over the characters as the tension tightens. Kubrick's sophisticated use of sound and austere visual style creates a hyper-realistic atmosphere, which he would put to even better use in his follow-up film, the heist classic The Killing. --Sean Axmaker