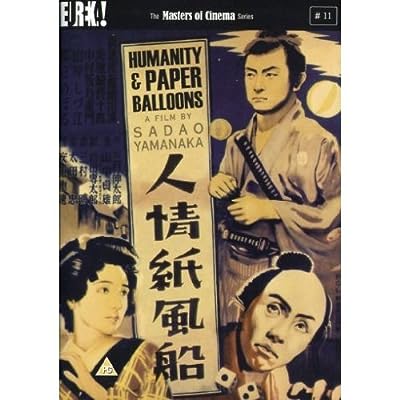 Price: $69.99
As of 2021-07-26 15:32:38 UTC (more info)
Product prices and availability are accurate as of 2021-07-26 15:32:38 UTC and are subject to change. Any price and availability information displayed on http://www.amazon.com/ at the time of purchase will apply to the purchase of this product.
Availability: Not Available - stock arriving soon
Buy Now from Amazon
Product Information (more info)
CERTAIN CONTENT THAT APPEARS ON THIS SITE COMES FROM AMAZON SERVICES LLC. THIS CONTENT IS PROVIDED 'AS IS' AND IS SUBJECT TO CHANGE OR REMOVAL AT ANY TIME.

United Kingdom released, PAL/Region 2 DVD: it WILL NOT play on standard US DVD player. You need multi-region PAL/NTSC DVD player to view it in USA/Canada: LANGUAGES: Japanese ( Mono ), English ( Subtitles ), SPECIAL FEATURES: Booklet, Interactive Menu, Photo Gallery, Remastered, Scene Access, SYNOPSIS: Widely regarded as Yamanaka's greatest achievement, Humanity and Paper Balloons [Ninjo kami fusen] was, tragically, his last film, and only one of three that survive today. In a short, six year, 22 film career Yamanaka quickly earned a reputation for exceptionally fluid editing and a beautiful visual form likened to the paintings of Japanese masters.The story develops in the Tokugawa era of the 18th century, in a poor district of Tokyo, where impoverished samurai live from hand to mouth among equally poor people of lower social classes. One such ronin (masterless samurai) Matajuro, spends his day looking for work whilst his wife, Otaki, makes cheap paper balloons at home. One rainy night, Shinza, a barber, and equally penniless, impulsively abducts the daughter of a wealthy merchant, hiding her at Matajuro's home. Their desperate plan has grave consequences when a ransom attempt backfires. The film, which starts and ends with suicide, is deeply pessimistic, insisting that life in feudal Japan was hellish and short for those at the foot of the social ladder. Humanity and Paper Balloons premiered the day Yamanaka was drafted to the frontline at the start of WWII. He died in Manchuria, 1938, aged just 29. ...Humanity and Paper Balloons ( Ninjo kami fusen ) ( Ballad of the Paper Balloons )