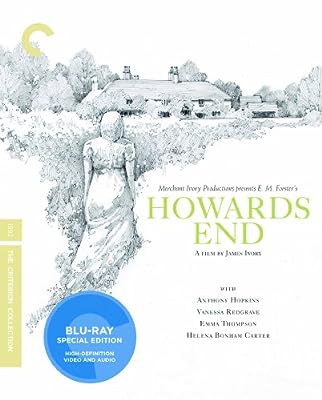 Price: $39.95
As of 2021-07-28 13:10:03 UTC (more info)
Product prices and availability are accurate as of 2021-07-28 13:10:03 UTC and are subject to change. Any price and availability information displayed on http://www.amazon.com/ at the time of purchase will apply to the purchase of this product.
Availability: Not Available - stock arriving soon
Buy Now from Amazon
Product Information (more info)
CERTAIN CONTENT THAT APPEARS ON THIS SITE COMES FROM AMAZON SERVICES LLC. THIS CONTENT IS PROVIDED 'AS IS' AND IS SUBJECT TO CHANGE OR REMOVAL AT ANY TIME.

The pinnacle of the decades-long collaboration between director James Ivory and producer Ismail Merchant, Howards End is a thought-provoking, luminous vision of E. M. Forster’s cutting 1910 novel about class divisions in Edwardian England. Emma Thompson won an Academy Award for her dynamic portrayal of Margaret Schlegel, a flighty yet compassionate middle-class intellectual whose friendship with the dying wife (Vanessa Redgrave) of rich capitalist Henry Wilcox (Anthony Hopkins) commences an intricately woven tale of money, love, and death that encompasses the country’s highest and lowest social echelons. With a brilliant, layered script by Ruth Prawer Jhabvala (who also won an Oscar) and a roster of gripping performances, Howards End is a work of both great beauty and vivid darkness, and one of cinema’s greatest literary adaptations.

• The Design of: Howards End, a detailed look at the costume and production designs for the film, including original sketches

• The Wandering Company (1984), a 50-minute documentary about the history of Merchant Ivory Productions

• PLUS: An essay by critic Kenneth Turan"