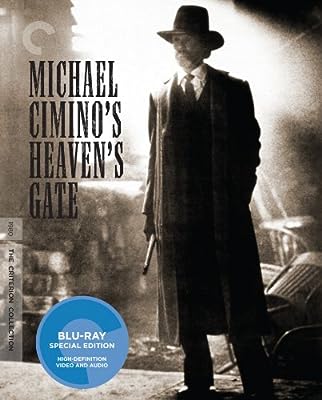 Price: $49.95
As of 2021-09-24 03:30:57 UTC (more info)
Product prices and availability are accurate as of 2021-09-24 03:30:57 UTC and are subject to change. Any price and availability information displayed on http://www.amazon.com/ at the time of purchase will apply to the purchase of this product.
Availability: Not Available - stock arriving soon
Buy Now from Amazon
Product Information (more info)
CERTAIN CONTENT THAT APPEARS ON THIS SITE COMES FROM AMAZON SERVICES LLC. THIS CONTENT IS PROVIDED 'AS IS' AND IS SUBJECT TO CHANGE OR REMOVAL AT ANY TIME.

A visionary critique of American expansionism, Heaven’s Gate, directed by Oscar winner Michael Cimino (The Deer Hunter), is among Hollywood’s most ambitious and unorthodox epics. Kris Kristofferson (Lone Star) brings his weathered sensuality to the role of a Harvard graduate who has relocated all the way to Wyoming as a federal marshal; there, he learns of a government-sanctioned plot by rich cattle barons to kill the area’s European settlers for their land. The resulting skirmish is based on the real-life bloody Johnson County War of 1892. Also starring Isabelle Huppert (White Material) and Christopher Walken (The Deer Hunter), Heaven’s Gate is a savage and ravishingly shot demystification of western movie lore. This is the full director’s cut, letting viewers today see Cimino’s potent original vision.