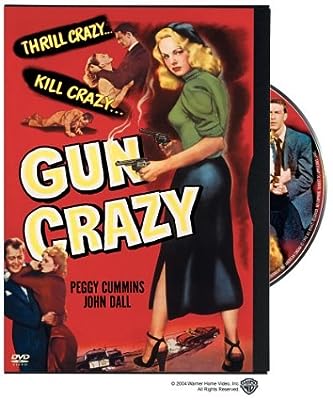 Price: $19.98
As of 2023-02-06 03:23:49 UTC (more info)
Product prices and availability are accurate as of 2023-02-06 03:23:49 UTC and are subject to change. Any price and availability information displayed on http://www.amazon.com/ at the time of purchase will apply to the purchase of this product.
Availability: Not Available - stock arriving soon
Buy Now from Amazon
Product Information (more info)
CERTAIN CONTENT THAT APPEARS ON THIS SITE COMES FROM AMAZON SERVICES LLC. THIS CONTENT IS PROVIDED 'AS IS' AND IS SUBJECT TO CHANGE OR REMOVAL AT ANY TIME.

One of the most vital of all film noir pictures, Gun Crazy has more cinematic gusto and sexual heat than almost any movie of its time. It's a variation on the Bonnie and Clyde story, but with a bizarre set-up: firearms enthusiasts John Dall and Peggy Cummins (neither of whom were ever this wild again) meet as sharpshooters in a carnival, then turn to crime. The direction, by Joseph H. Lewis, is like a spray of hot lead from a gun barrel, capped by an amazing sequence--shot in one long take--of a bank robbery seen from the backseat of the getaway car. (Billy Wilder himself called up Lewis to find out how he did it.) If most film noirs trace the anxieties of postwar America, Gun Crazy goes directly to sheer madness. Trivia note: the film had a title change, to Deadly Is the Female, for its original release, whereupon it was changed back. --Robert Horton