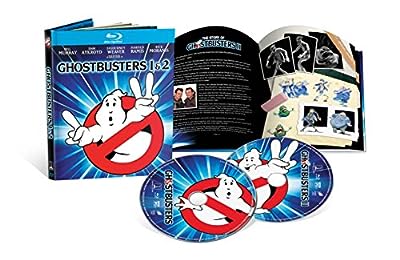 Price: $25.99
As of 2023-02-06 05:20:05 UTC (more info)
Product prices and availability are accurate as of 2023-02-06 05:20:05 UTC and are subject to change. Any price and availability information displayed on http://www.amazon.com/ at the time of purchase will apply to the purchase of this product.
Availability: Not Available - stock arriving soon
Buy Now from Amazon
Product Information (more info)
CERTAIN CONTENT THAT APPEARS ON THIS SITE COMES FROM AMAZON SERVICES LLC. THIS CONTENT IS PROVIDED 'AS IS' AND IS SUBJECT TO CHANGE OR REMOVAL AT ANY TIME.

The classic supernatural comedies that defined a generation: Ghostbusters and Ghostbusters 2, together in this special collector's edition Blu-ray set. Celebrate 30 years of the Ghostbusters franchise with remastered high-def picture & sound for both movies, plus all-new and never-before-seen special features. Plus, explore the history of the films with this deluxe collector’s edition, loaded with production notes, character sketches, insider info and more. Bring home these spooktacularly successful films that captured the imagination of audiences around the world—and redefined the action-comedy genre in the process. Who you gonna call?

The Bad and the Beautiful