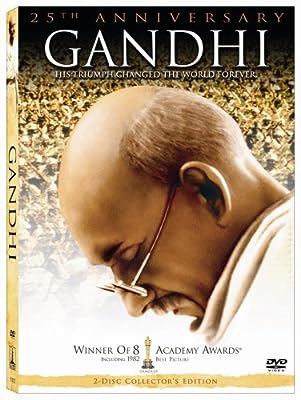 Price: $9.96
As of 2023-02-06 03:25:53 UTC (more info)
Product prices and availability are accurate as of 2023-02-06 03:25:53 UTC and are subject to change. Any price and availability information displayed on http://www.amazon.com/ at the time of purchase will apply to the purchase of this product.
Availability: Not Available - stock arriving soon
Buy Now from Amazon
Product Information (more info)
CERTAIN CONTENT THAT APPEARS ON THIS SITE COMES FROM AMAZON SERVICES LLC. THIS CONTENT IS PROVIDED 'AS IS' AND IS SUBJECT TO CHANGE OR REMOVAL AT ANY TIME.

Sir Ben Kingsley stars as Mohandas Gandhi in Lord Richard Attenborough's riveting biography of the man who rose from simple lawyer to worldwide symbol of peace and understanding. A critical masterpiece, GANDHI is an intriguing story about activism, politics, religious tolerance and freedom. But at the center of it all is an extraordinary man who fought for a nonviolent, peaceful existence, and set an entire nation free. Winner of 8 Academy Awards® including Best Picture, Best Director (Richard Attenborough) and Best Actor (Sir Ben Kingsley), GANDHI's highly acclaimed cast also includes Candice Bergen, Edward Fox, Sir John Gielgud, Roshan Seth and Martin Sheen.

Sir Richard Attenborough's 1982 multiple-Oscar winner (including Best Picture, Best Director, and Best Actor for Ben Kingsley) is an engrossing, reverential look at the life of Mohandas K. Gandhi, who introduced the doctrine of nonviolent resistance to the colonized people of India and who ultimately gained the nation its independence. Kingsley is magnificent as Gandhi as he changes over the course of the three-hour film from an insignificant lawyer to an international leader and symbol. Strong on history (the historic division between India and Pakistan, still a huge problem today, can be seen in its formative stages here) as well as character and ideas, this is a fine film. --Tom Keogh

Beyond Gandhi on Amazon.com